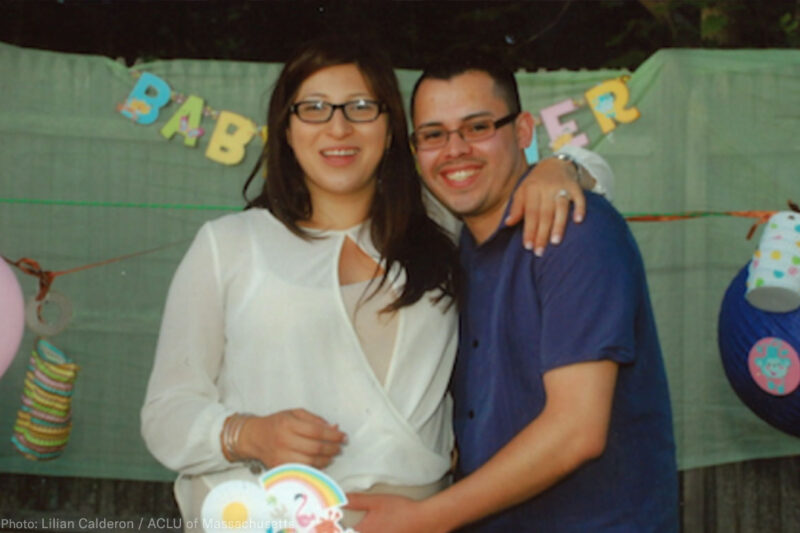 UPDATE: On February 13, ICE released Calderon from detention, which will allow her to reunite her with her husband and young children while she seeks to vindicate her legal rights.

Lilian Calderon, who was detained last month by Immigration and Customs Enforcement, is a 30-year-old mother of two young children who has lived in the United States since she was brought across the border at the age of three. Her detention has separated her from children who desperately need her care and raised the possibility that she could be whisked away to Guatemala, a country she barely knows.

Calderon has lived with a final order of removal since she was 15 — when her father lost his asylum bid. In 2016, after living in the shadows her whole life, she and her husband began a process created by the government that allows individuals in Calderon’s situation to apply for lawful permanent residency.

On Jan. 17, she appeared at the Johnston, Rhode Island, offices of U.S. Citizenship and Immigration Services (USCIS) with her husband for an interview designed to confirm their marital relationship — the first step in the process of seeking to become a lawful permanent resident. At the end of the interview, USCIS recognized their marital relationship as legitimate, setting her one step further along the path of seeking her status. Immediately afterward, she was abruptly detained by ICE and taken to a detention facility in Boston. In effect, the government’s left hand beckoned her forward, and its right hand grabbed her.

But that detention — and any potential removal of Calderon — violates U.S. laws, regulations, and the Constitution, which prohibits detentions that are not reasonably related to the government’s purpose of preventing flight and protecting the community. That’s why the ACLU of Massachusetts, supported by the ACLU of Rhode Island, this week filed a petition in federal court to seek Calderon’s immediate release from immigration detention. Although the federal judge’s order bars any immediate deportation to Guatemala, Calderon’s ordeal continues as the court weighs whether she should be released from a cell in Boston and returned to her two young children and husband.

Our petition for Calderon’s releases notes the impact her detention has already had on her family, including her 4-year-old daughter and 22-month-old son. Her young daughter has begun having nightmares three or four times a night, bursting into tears without warning, crying for her mother, and becoming frightened by brief separations from other family members. Her younger son can no longer sleep in his crib on his own. Her husband says he feels like he’s lost his best friend.

Calderon is being detained even though there is no evidence that she poses a flight or security risk. This is yet another local example of families torn apart and lives disrupted for no legitimate immigration enforcement purpose. The Trump administration’s detention and deportation machine grinds on, leaving nothing but misery in its wake.