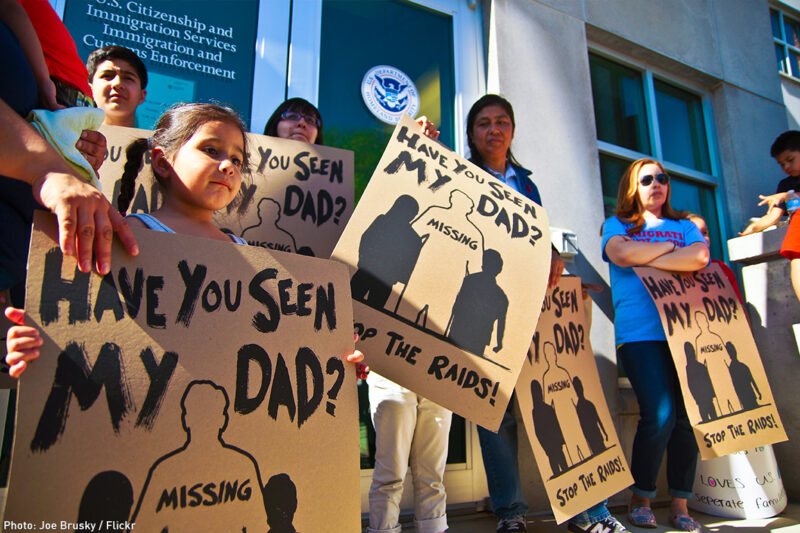 You may have heard how Trump is trying to bully local police departments into becoming part of his deportation force.

ACLU affiliates across the country are fighting back.

Right now, we’re sending letters to law enforcement and other local leaders in a dozen states across the country—in Alaska, Delaware, Florida, Hawaii, Idaho, Maine, Minnesota, Ohio, South Carolina, Rhode Island, Utah, and Virginia to explain how being part of Trump’s deportation force creates risks for them and their communities.

As we’ve explained in the past, Immigration and Customs Enforcement officials often ask local law enforcement agencies to keep people in jail for them so they can initiate deportation proceedings. Because ICE does not seek a judicial determination of probable cause, these requests put local police in the position of holding people in jail without the legal authority to do so, which violates their constitutional rights.

On Friday, ICE announced changes to how it asks local police to hold people in their custody. The “new” forms ICE released are largely more of the same, except that they make clear that the Trump administration has abandoned the Obama administration’s deportation priorities — or, in effect, any priorities at all. One change ICE has introduced is that it will issue administrative “warrants” alongside it detainer requests.

While this change was undertaken to try to address court decisions making clear that ICE has been in violation of federal law on a massive scale, the introduction of these “warrants” does nothing to address the constitutional flaws. ICE warrants are little more than a second piece of paper signed by an ICE agent — not, like familiar criminal warrants, signed by a judge. ICE is sending them to local police to give them a false sense of security and paper over the flaws in the detainer system, but they don’t offer local police any legal authority to hold someone.

We also urge local police not to join the notorious 287(g) program, which allows ICE to deputize local police officers as immigration agents. In the past, 287(g) has been used as a dangerous tool, enabling rogue departments or officers to racially profile their residents. Arizona Sheriff Joe Arpaio of Maricopa County, who was recently voted out of office for being anti-immigrant and is currently facing charges of criminal contempt, had a 287(g) program before the federal government pulled it, citing Arpaio’s discriminatory policing practices. Another sheriff with a 287(g) program in Alamance County, North Carolina, was prosecuted by the Department of Justice for targeting Latinos. The investigation found that an Alamance captain emailed a video game to his employees in which players shot at children and pregnant women crossing the border.

Several states are also trying to enact so-called “anti-sanctuary” legislation that would actually require that local police, in various ways, help the Trump administration try to deport every single immigrant it can. This is another bad move that could place communities in a bind where they have to do something that violates people’s rights. Newell Normand, the sheriff of Jefferson Parish, Louisiana, used one choice word to describe an “anti-sanctuary bill” introduced in his state last year.

Local leaders should know about the risks Trump’s deportation force poses to their residents and their rights. Most want to do what’s right. The ACLU is here to help communities enact good policy that protects all people. Drawing a clear line between immigration and policing advances constitutional rights, public safety, and solidarity.

Trump’s deportation force will harm community relations, costs lots of money, and distract from local priorities. You can join the fight, too, by urging your local elected officials to protect the rights of all residents. Check out our People Power map to see where many activists are fighting already.