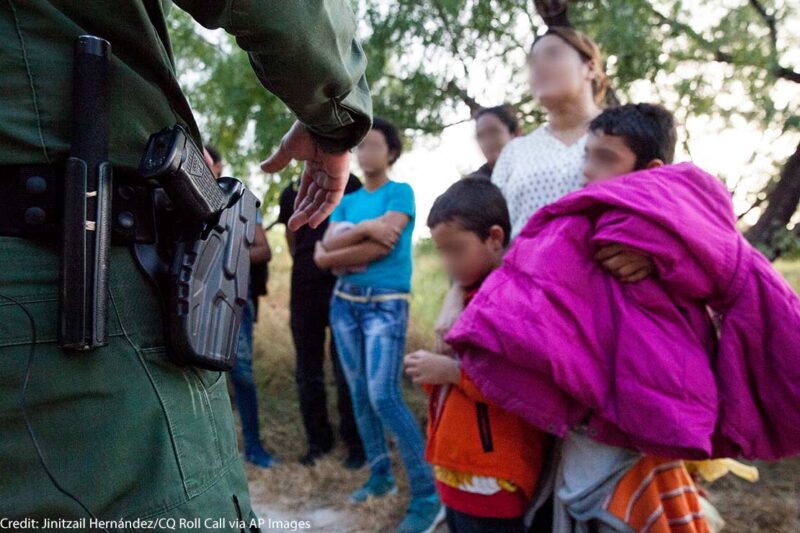 This blog is the fifth in a series outlining a reimagined, just, and humane immigration system for the United States.

The approximately 15 million residents of the Southwest border region live under a massive  federal police presence and extensive surveillance: the ever-present hum of Customs and Border Protection (CBP) helicopters overhead; residents’ information collected by CBP surveillance cameras, drones, license plate readers, and blimps; and Border Patrol vehicles roaming their neighborhoods and questioning them at interior checkpoints. It’s all at enormous U.S. taxpayer expense, and it does not make us safer.

A meaningful shift in border policy to restore the civil rights and liberties of border communities means an end to walls, wasteful militarization, intrusive surveillance technology, and the removal of Border Patrol, CBP’s law enforcement arm, from policing U.S. communities.

Border Patrol not only executed the Trump administration’s cruelest border policies, from family separation to the inhumane and dangerous detention system, the agency also further expanded its over-policing and militarization of U.S. communities. Reversing Trump’s abuses is not enough. The next administration must reign in this rogue agency.

CBP’s violent tactics cause pervasive racial profiling, injuries, and deaths. Border Patrol vehicle chases increased under the Trump administration, injuring at least 250 people, a 42 percent increase, and killing 22 people. Despite clear legal boundaries, Border Patrol commonly flouts constitutional protections against racial profiling, often providing flimsy, pretextual reasons to stop or search Black and Brown community members. Border Patrol’s training materials even claim that a car riding too low or too high, or when someone makes too much or not enough eye contact, can justify a stop. CBP operates over 40 permanent interior checkpoints, which block border communities from essential services — including medical care during a pandemic — and limit free movement.

Consequently, U.S. citizens, legal permanent residents, tourists, and others are frequently pulled over or questioned by Border Patrol for no reason, near and far from the border — such as when a Border Patrol agent interrogated two U.S. citizens for speaking Spanish at a Montana convenience store. We sued and, in the course of litigation, CBP agents admitted to profiling “Mexicans.”

The Trump administration also flooded the border region with Border Patrol agents and, in unprecedented fashion, deployed CBP personnel and surveillance assets to monitor Black Lives Matter protests in cities nationwide. Immigration personnel’s over-policing and militarization of border and interior communities is rooted in our nation’s history of over-policing Black people and must end.

President-elect Biden stated that, “the border between Mexico and the U.S. shouldn’t be treated like a war zone.” To solidify that pledge, the Biden administration should issue an executive order directing CBP to comply with Fourth Amendment standards against unreasonable search and seizure throughout the U.S., including in any border zone, and direct the Attorney General to conduct all necessary investigations to assess steps to bring CBP policy and practice into compliance with those standards. Permanent interior checkpoints should be eliminated, and the number of Border Patrol agents should immediately be reduced by 50 percent.

Biden must also tackle the destructive border infrastructure that has further militarized the region, wasted tax dollars, and violated the law. Through unlawful money grabs, the Trump administration funded construction of over 300 miles of unauthorized border wall, devastating sensitive ecosystems, damaging communities, and funneling migrants into more deadly regions. Not only should all wall construction immediately cease, the Biden administration should assess how to dismantle existing walls and barriers through consultation with environmental experts and border and tribal communities, and rapidly remove unlawfully constructed border wall.

The Trump administration also deployed, through multiple operations, over 16,000 Defense Department personnel to the border. His administration issued various memos and directives expanding permissible use of force guidelines for military personnel at the border, including permitting the use of deadly force in certain circumstances. Retired military generals called these deployments “dangerous” and “wasteful,” and Border Patrol’s own union called them a “colossal waste of time.” Troops should be withdrawn from the border and not deployed again, and this region must not be subject to forever expanding surveillance.

Surveillance technology, justified as a means of border security, frequently spreads across border communities, degrading privacy rights of all residents. A recent study found 230 instances of local law enforcement using advanced technologies in border communities. CBP also operates an air force of drones, planes, and helicopters equivalent to Brazil’s entire combat air force, yet drones are responsible for only 0.5 percent of border apprehensions. The drones are more often loaned to other law enforcement agencies, including during recent protests over the killing of George Floyd. CBP must abandon its use of drones.

The Trump administration has begun to deploy hundreds of mobile surveillance towers, to be installed across the border over the next five years, adding to the dragnet of existing cameras across the region. This is despite CBP spending $1 billion on its last failed attempt to create a “virtual border fence.” These efforts don’t come with any of the necessary privacy protections, nor does peppering sensitive lands with mobile surveillance towers respect the environment or border communities.

Invasive surveillance technologies are not a viable alternative to physical border barriers absent strict privacy protections. Other mass surveillance devices — like tethered blimps and surveillance towers — must never be used to surveil border communities or other interior areas of the U.S.

President-elect Biden pledged to “ensure our values are squarely at the center of our immigration and enforcement policies.” A smart border policy that both restores the civil rights and liberties of border communities and upholds our values requires an end to walls, wasteful militarization, intrusive surveillance technology, and the removal of Border Patrol from policing U.S. communities.