Victory! The Slants Are Officially Rock Stars of the First Amendment 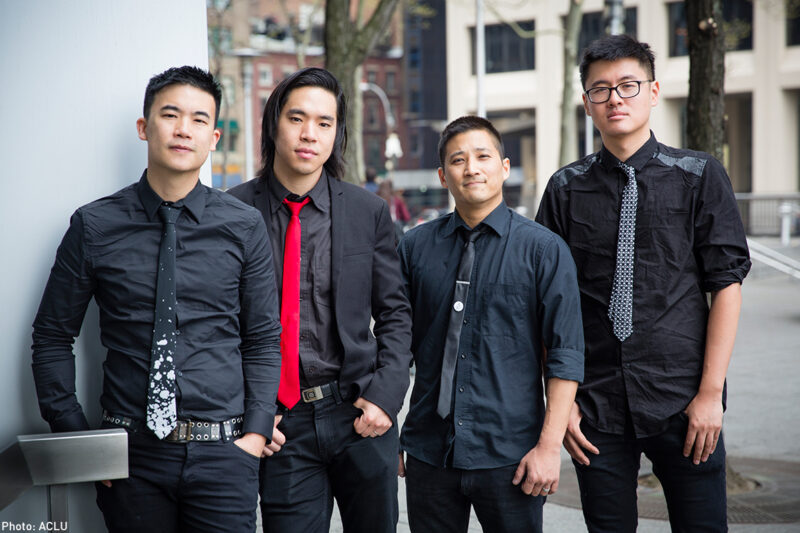 The Supreme Court today struck down portions of the Lanham Act, a 1946 federal trademark law that allowed the government to deny “offensive” trademarks as a violation of trademark holders’ free speech rights. Agreeing with arguments made by the ACLU in its brief to the court, the justices held that the First Amendment prevents the government from withholding a substantial government benefit just because it doesn’t like what you have to say.

The court’s ruling makes a second, less formal determination: The Chinatown dance-rock band The Slants are the new poster children for the First Amendment.

The justices unanimously agreed that The Slants’ First Amendment rights were violated when the government claimed the right to control their speech in exchange for offering a trademark. The opinion warns against government moves to “silence or muffle the expression of disfavored viewpoints.” Fortunately, the risk of that kind of broad censorship is much lower after today’s decision.

The Slants chose their name to reclaim and redeem a racial slur often used against Asians and Asian-Americans.

Years ago, The Slants applied for a registered trademark, a massive financial benefit handed out by the federal Patent and Trademark Office (PTO). For any band with an aspirational following, a registered trademark means a lot: the right to brand yourself — and your products — with an expression of your choosing and a strong right to enforce your claim against fakers and counterfeiters. That makes the registration of trademarks a substantial government benefit. And if the First Amendment means anything, it means that the government can’t hand out benefits based on how much it agrees with the views you express.

There is absolutely no doubt that this particular trademark expresses a very clear message: The Slants chose their name to reclaim and redeem a racial slur often used against Asians and Asian-Americans. After they applied for the registration, the PTO examiner handling their application denied them a trademark — after Googling the band and discovering it was made up of Asian-American rockers. He thus determined that the band was using “slant” as a slur and denied their application under the Lanham Act.

That was censorship, pure and simple.

The Lanham Act is a federal law that — until today — permitted the government to deny registered trademarks determined to be “disparag[ing],” or otherwise “offensive” or “immoral” to a “substantial composite” of an affected group. And despite the fact that the members of the Slants are themselves part of the “affected group” in question, the PTO found the name too offensive for a registered trademark.

The Slants weren’t satisfied with that decision. And like the rock stars they are, they didn’t take it lying down. The band appealed the PTO’s decision to the U.S. Court of Appeals for the Federal Circuit, where we filed an amicus brief and provided oral argument to the court on the glaring First Amendment problems with the Lanham Act. The band — and the First Amendment — won. But the federal government appealed to the Supreme Court.

Watch: The Slants Perform at the ACLU

And thank goodness it did!

Today the Supreme Court affirmed a core value of free speech: The government cannot withhold a benefit in order to limit or punish what it perceives to be offensive speech. And hopefully today’s decision will put a stop to the absurd practice of PTO examiners acting as formal speech police, Googling people to find out if they’re the “right kind” to receive a government benefit.

As with many things under the First Amendment, this decision may lead to uncomfortable results: Products with truly racist or sexist names will (continue to) appear on shelves and a certain Washington football team now undoubtedly gets to retain its own offensive team name, which lost its trademark in 2014 in a decision upheld by lower courts.

Let’s be clear: Unlike in the Slants’ case, there is no cultural reappropriation going on with the NFL team. But there’s no way to lawfully censor speech that offends us without allowing the government the power to censor speech that offends anyone — including The Slants’ band name. When we object to ideas that appear in our marketplace, the default response shouldn’t be to sweep them under a rug and pretend that they aren’t there, but rather call them out, boycott companies that make products that offend us, and ensure our spending reflects our values.

Censorship doesn’t just violate the First Amendment — it often doesn’t produce its intended results. As many activists who lived through the civil rights era, or protested in the streets just this past year, could tell you: Restrictions on free speech are often applied most stringently against groups trying to challenge the status quo.

The Slants are no exception. Decades of history have taught the ACLU that freedom of speech and racial justice are inseparable. And The Slants are now officially rock stars of both.

The ACLU’s brief on behalf of The Slants’ First Amendment rights was filed along with the ACLU of Oregon, the ACLU of the District of Columbia, and a group of racial justice organizations.