A TV Mega-Merger That’s Bad for the First Amendment 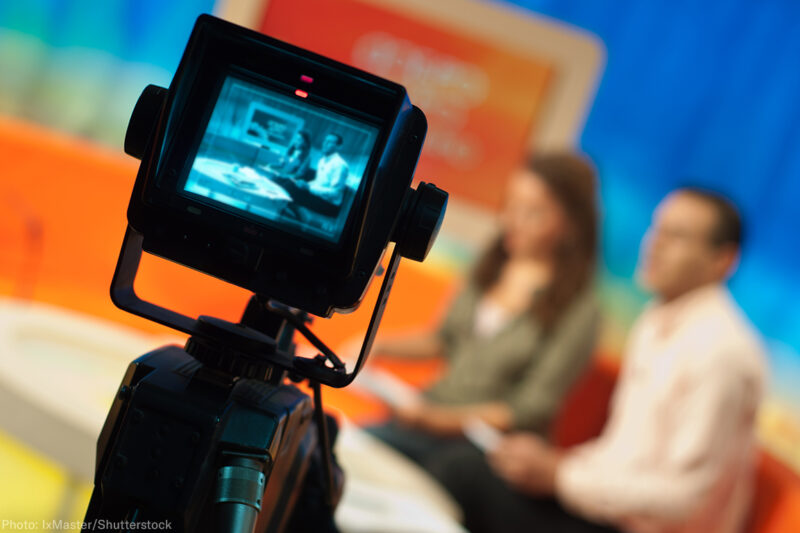 The Federal Communications Commission is currently considering a corporate acquisition that would make a single company — Sinclair Broadcasting Group — the largest owner of local TV stations in history.

Americans watch more local news than cable news or network news, making that medium key for informing the public about important issues. In a public comment submitted Tuesday, we formally urged the FCC to block the deal. This unprecedented concentration of control, which contradicts the FCC’s own policies about how wide a broadcasting company’s reach can be, would stifle the diversity of views in the press that’s essential for a healthy democracy.

You may have heard of Sinclair before, because it has been exposed for repeatedly injecting politically charged segments into local news, which otherwise typically avoids ideological punditry.

In March, this video of anchors at Sinclair-owned stations across the country reciting a script about the dangers of “one-sided news” went viral:

In the segment, after declaring their commitment to serve the local interests of their communities, dozens of anchors parroted President Trump’s lambasting of “fake news.” The irony could not be more apparent: local broadcasters being forced by a giant, nationwide conglomerate to convey a political message about … the importance of apolitical coverage and local control.

Our opposition to the Sinclair merger has nothing to do with where Sinclair sits on the ideological spectrum. The problem is that Sinclair’s attempt to acquire Tribune Media would give it control over some 200 TV stations, virtually guaranteeing less viewpoint diversity in local news.

The Supreme Court ruled decades ago that the FCC should promote viewpoint diversity in the media, explaining, “It is the purpose of the First Amendment to preserve an uninhibited marketplace of ideas in which truth will ultimately prevail, rather than to countenance monopolization of that market.” This is why the FCC itself sets limits on the number of stations one company can own.

Since the 1940s, the ACLU has opposed media consolidation and its potential for diminishing the diversity of views available to the public. And, while we primarily defend civil liberties against government infringement, we have also long held that when it comes to regulating the public airwaves, the government is obligated to stop private companies from interfering with viewpoint diversity.

Unfortunately, the FCC has shown signs of doing the exact opposite. Trump-appointed Chairman Ajit Pai gave the proposed merger a huge boost in 2017 by suddenly reinstating a long discredited rule that allows media companies to own a greater number of stations while still falling within ownership limits. Advocacy groups are currently challenging the FCC’s reinstatement of this rule in court.

The need for the government to block the Sinclair deal is also clear because of the company’s pattern of forcing local broadcasters to run ideological content — and censor other stories that it deems contrary to its political interests. Among other examples, last year a Sinclair-owned station in Seattle was asked to report on the recruitment of paid protestors at Trump’s inauguration, a story that was later proven false. In 2004, Sinclair pulled an episode of ABC’s Nightline in which the names of troops killed in Iraq were read, with the company claiming that it was intended to hurt President Bush. Perhaps most famously, Sinclair imposes “must-run” segments, such as regular editorial pieces by former Trump White House official Boris Epshteyn, on its local stations.

Forcing local broadcasters to engage in political commentary denies viewers the honest coverage they seek — and this practice will expand with the merger.

In addition to these First Amendment-related factors, we are greatly concerned about the proposed merger because of its potential to disproportionately harm minority communities. Sinclair has not shied away from running pieces that disparage minority groups, such as its recurring “Terrorism Alert Desk” segment that has equated Islam with terrorism, and its commentaries by Sebastian Gorka, who notoriously warned on a Sinclair-produced town hall event that “black Africans” were “murdering each other by the bushel” in Chicago.

Overall, the Sinclair deal combines unprecedented market control with a pattern of forcing local broadcasters around the country to run corporate-scripted propaganda. The FCC must protect the principles embodied by the First Amendment and deny the merger.