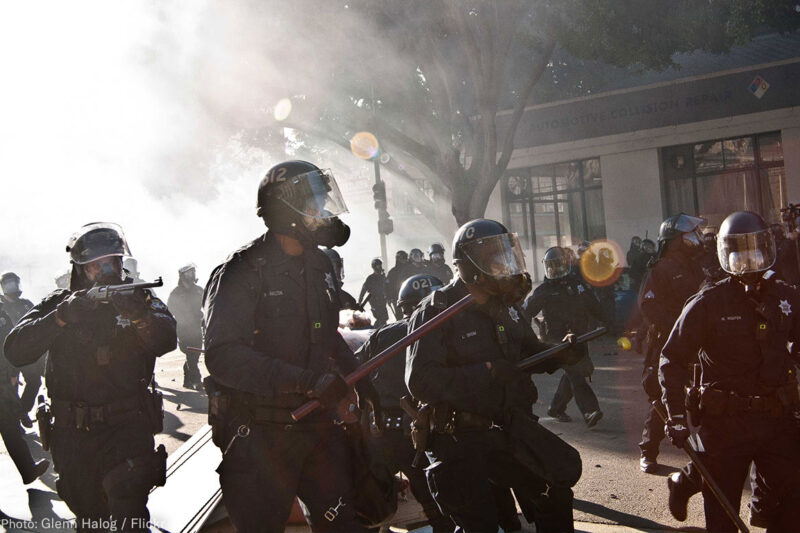 This week, the FBI and the Justice Department opened investigations into the conduct of St. Louis Metropolitan Police Department officers for unconstitutional actions during protests in September. The federal investigation is just the latest in a string of actions by courts and community leaders to hold the St. Louis police accountable for its systemic abuses of power.

The federal investigation centers on allegations of civil rights violations by law enforcement officers when the community expressed its outrage, pain, and grief in protests after the September acquittal of police officer Jason Stockley in the killing of Anthony Lamar Smith. Police pepper-sprayed protesters and bystanders without warning, even spraying some people in the face when they were sitting on the ground with their hands zip-tied. Officers interfered with people recording police activities in photos and on video. Police also unlawfully detained people during a kettling incident in downtown St. Louis.

The ACLU of Missouri sued the city for this police misconduct. In our suit, we asked for the court to protect the people whose rights were violated and whose rights could be violated again. It took three days of testimony and 18 witnesses to tell the stories of what hundreds of people at protests experienced on the streets of St. Louis: systemic constitutional violations and retaliatory actions by police officers.

In a win for the people of St. Louis and for the First Amendment, a federal judge granted our preliminary injunction on Nov. 15, requiring police to immediately adopt protocols to prevent mass deprivation of people’s constitutional rights. Under the protocols, the city of St. Louis cannot declare an “unlawful assembly” unless there is an imminent threat of violence. It also cannot declare an “unlawful assembly” for the purpose of punishing people for exercising their First Amendment rights. And police may not use chemical agents against nonviolent protestors in the absence of probable cause for an arrest or use chemical agents to disperse protestors or as punishment for protesting.

This is a win for the constitutional rights of the people of St. Louis, particularly communities of color. St. Louis is one of the nation’s most racially segregated cities, where ZIP codes separated by only a few miles can mean an 18-year difference in life expectancy. The city’s residents also confront the deadliest police force in the United States. St. Louis police kill people at a higher rate than any police department among the nation’s 100 most populous cities, according to data gathered from January 2013 to June 2017.

In an unusual move for this stage of the case, after issuing her preliminary ruling the judge also ordered the St. Louis Metropolitan Police Department and the ACLU to mediation — so that the case potentially can get resolved quickly without going to trial. While it’s important that the federal government investigates these systemic violations of civil rights, the city of St. Louis should now work with the community to develop a collaborative policing model that protects constitutional rights and promotes public safety. We believe the court saw a need — and opportunity — for real change through collaboration.

The St. Louis police department doesn’t need to look far for a model of how to change its culture of policing. The U.S. Department of Justice’s consent decree with the nearby Ferguson Police Department provided many common-sense solutions for police interactions with protestors and the community after the fatal police shooting of Michael Brown. Much of what the judge granted in our preliminary injunction came from this well-thought-out model.

There are community-wide reform efforts as well. The Ferguson Commission, a group of leaders tasked by the Missouri governor to study the reasons for the systemic inequalities in the St. Louis region, also outlined recommendations for collaborative policing and criminal justice reform in its report that the St. Louis police should implement.

Local elected leaders have the opportunity to take up the fight for police reform, too. The St. Louis Board of Aldermen can protect the Constitution by passing Board Bill 134. The bill establishes First Amendment protections for the city of St. Louis. Modeled after a 12-year-old ordinance in Washington, D.C., it sets clear guidelines for police conduct during protests. Similar solutions proposed in the bill are also in the 2016 consent decree between the U.S. Department of Justice and the Ferguson Police Department.

The messages from the community, the courts, and now the federal government couldn’t be any clearer: It’s time for St. Louis police to radically alter its culture and practice constitutional policing.