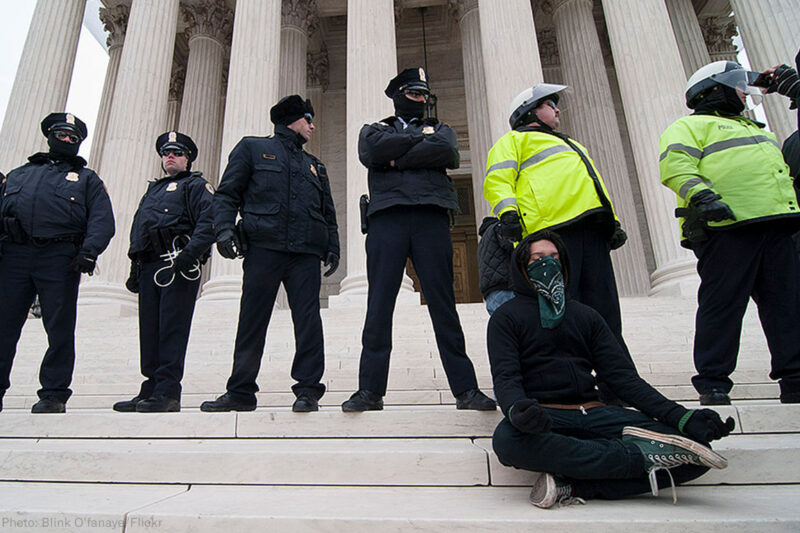 Update, June 19, 2018: On Monday, the Supreme Court ruled that in some cases, retaliatory arrest lawsuits against the police can proceed even where the police had probable cause to arrest the individual. The court limited its decision to circumstances where arrestees alleges that “high-level” city policymakers adopted an official policy to retaliate against them by ordering his arrest. It did not decide whether probable cause is an obstacle to cases involving on-the-spot arrests. This decision is a positive first step toward allowing critics of government to sue when the police retaliate against them due to their speech — even if the police had some other reason for their arrest. Probable cause for an unrelated offense should not give law enforcement officers free rein to shut down speech they don’t like.

Earlier this year, a photojournalist headed to a Black Lives Matter protest in Times Square against the New York Police Department, and took out his camera to film it. As he approached a crowd of protesters, he heard a police supervisor instruct his officers to “just take somebody and put them in handcuffs.”

An officer stopped the journalist and placed him under arrest for failure to comply with an order to disperse. He was soon released, and sued the NYPD for arresting him in retaliation for exercising his First Amendment rights. He pointed out the NYPD supervisor’s explicit order to make an arbitrary arrest, and proved that police barricades were positioned to block people from dispersing, making compliance with the dispersal order physically impossible. In all, the evidence of retaliation was strong.

Yet the court not only ruled against the journalist, but told him he was barred from bringing the lawsuit in the first place. Even though the dispersal order may have been faulty, the officer could have had probable cause to arrest him for a separate pedestrian traffic violation, which automatically rendered irrelevant any evidence of retaliation.

The court was relying on what’s called the “no probable cause” rule, which has the force of law in New York. The rule states that in order for an individual to sue for retaliatory arrest, she must prove at the outset that the officer had no probable cause to arrest her for any crime — even one the officer hadn’t thought of at the time of the arrest. The Supreme Court will soon decide whether to make that rule the law nationwide.

The Supreme Court will specifically consider the case of a Florida man, Fane Lozman, who alleges that his arrest for disorderly conduct at a Riviera Beach city council meeting was made in retaliation for his vocal opposition to a municipal redevelopment plan and for his accusations of corruption on the council. In an amicus brief filed today, the ACLU and the First Amendment Foundation have urged the court to allow his claim. If the court endorses the “no probable cause” rule, it will effectively immunize governmental officials from liability even when they engage in clear-cut retaliation.

There are several reasons why this rule is both unconstitutional and bad policy. First, it allows law enforcement to use an “arrest now, justify later” strategy in which an arresting officer can use a probable cause theory that was not even on the officer’s mind or communicated to the plaintiff at the time of arrest.

This rule would bar retaliatory arrest lawsuits even when there is overwhelming evidence of a retaliatory motive. The enormity of the criminal code, and the ease of mistakenly violating it, practically guarantees this result. Are you carrying a sign attached to a stick thicker than 3/4 inch during a protest? You may have committed a crime, which the police could use against you in defending against a lawsuit for retaliatory arrest. That’s true even if, say, a police officer told a group of racial justice protesters that the real reason for their arrest was his disdain for Black Lives Matter. If the rule stands, this evidence would be useless in a lawsuit against the officer if he had probable cause to arrest the protesters for any crime.

If the probable cause rule becomes law nationwide, retaliatory arrest lawsuits — a primary tool for deterring police misconduct — will become much harder to win. As a result, police officers who wish to silence political speech will be emboldened and First Amendment rights will be chilled.

The Supreme Court ruled in 2006 that “the law is settled that as a general matter the First Amendment prohibits government officials from subjecting an individual to retaliatory actions.” Let’s hope the court doesn’t cripple an important tool for enforcing this principle.