Is the Government Planning to Surveil Keystone XL Protesters? 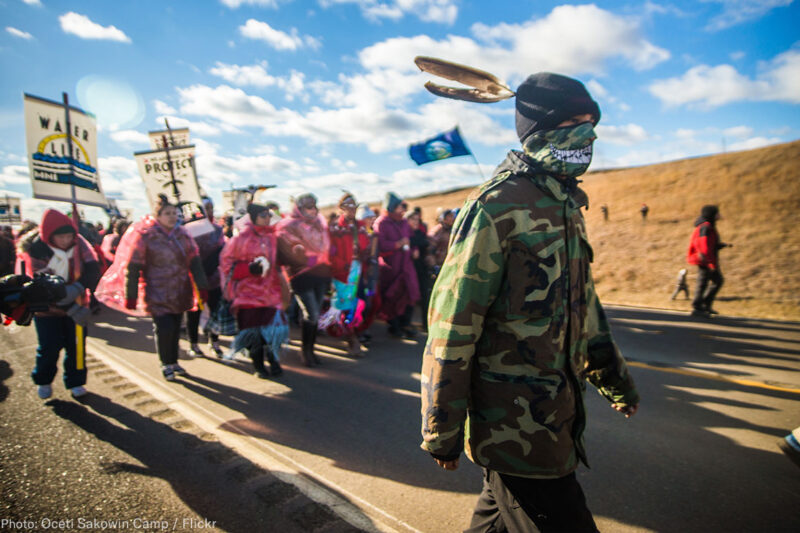 In the aftermath of Dakota Access Pipeline protests at Standing Rock, leaked documents revealed that law enforcement agencies had collaborated with private security contractors to employ counterterrorism tactics against “pipeline insurgencies” and to manufacture a conspiracy lawsuit against indigenous and environmental protesters.

Now, with the State Department greenlighting the new Keystone XL pipeline route (pending a new review ordered by a federal judge), indigenous and environmental activists are wondering: Will the government treat environmental protesters with the same wrath as last time?

Rather than waiting for the first concussion grenades and tear gas canisters to fly, we’re demanding answers now. On Tuesday, we sued the Department of Homeland Security, the Department of Defense, and several other federal agencies to find out the government’s plans for cooperating with state law enforcement actors and private security contractors around anticipated Keystone XL protests. From these records, we hope to determine what plans the government has for thwarting, surveilling, and otherwise engaging with indigenous and environmental activists who oppose the construction of another oil pipeline. We also hope to determine whether and how the federal government is targeting indigenous communities to preempt political protest.

At Standing Rock, we witnessed law enforcement flying planes, helicopters, and drones over protest encampments to record their activities at all hours. We heard accounts of local sheriff departments teaming up with federal law enforcement authorities to deploy tear gas, rubber bullets, concussion grenades, mace, and water cannons on peaceful protesters near the Oceti Sakowin Camp. We learned of law enforcement officers forcing women protesting the pipeline to undergo strip searches in front of male officers.

We’d like to know if the same is planned for Keystone. Our suit comes after months of requesting records from federal agencies, to little avail. But the records we have acquired show that many more are being withheld — in fact, the government itself admits this. A redacted email chain released to us by the Army Corps of Engineers includes senior officials in the Bureau of Land Management and the Army Corps discussing the creation of an “interagency team” to “deal with safety and security concerns related to the Keystone XL project.”

Though this email correspondence took place over a year ago, the Army Corps says there are no other records on this subject, other than one sensitive email chain the government won’t disclose because it involves “potential protest activity.”

Thanks to parallel state records requests by the ACLU of Montana, however, we’re calling the federal government’s bluff. Those requests have yielded substantial evidence of federal preventative measures for Keystone XL protests, such as a Department of Justice “anti-terrorism” training in Fort Harrison and a DOJ “Social Networking and Cyber Awareness” training in the city of Circle. These disclosed records corroborate reports in the Omaha World Herald of collaboration between state and federal law enforcement officials.

According to those reports, Morton County, North Dakota, Sheriff Kyle Kirchmeier, whose department was involved in responding to the Dakota Access Pipeline protests, has been in communication with other states over how to respond to oil pipeline protestors. Kirchmeier is the same sheriff who characterized the Standing Rock protests as “an ongoing riot,” and who, in response to questions about the use of water hoses against water protectors, which caused seizures and hypothermia, said, “It was sprayed more as a mist.”

Evidence that the federal government plans to address Keystone XL protests with counterterrorism tactics, coupled with the recent memory of excessive uses of force and surveillance at the Standing Rock protests, raise immense concerns about the safety of indigenous and environmental protesters who seek to exercise their First Amendment rights. Indigenous communities, in particular, have been historically over-policed and subject to unwanted governmental surveillance, with the surveillance of the Dakota Access Pipeline Spirit Camp one of many examples.

The First Amendment protects political speech from the threat of undue government scrutiny, and the extent of that scrutiny, in this case, is unknown. If the government is planning to prevent or monitor indigenous and environmental protests, the activists involved have a right to know about it.