Free Speech Can Be Messy, but We Need It 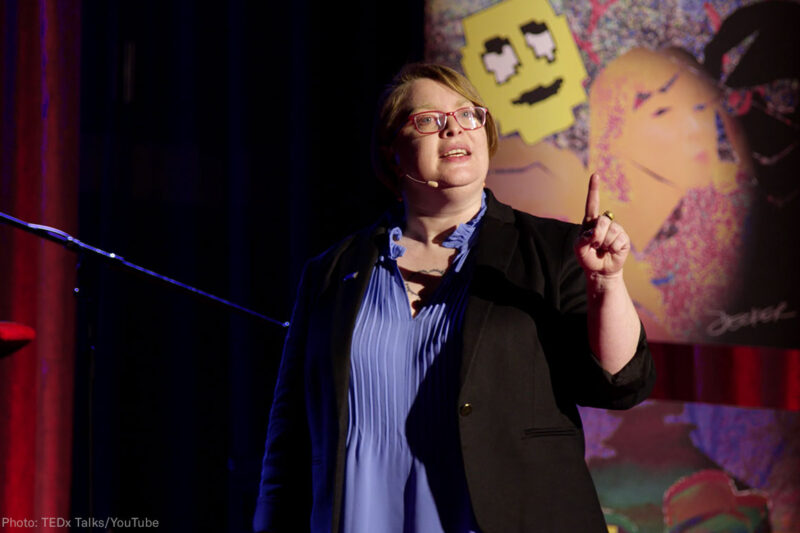 Earlier this year, ACLU attorney Lee Rowland spoke at TedX Reno to debunk some common misconceptions about free speech. Below is an edited version of her talk.

The year 2017 was a hell of a year for the First Amendment. Nowhere was more central to this culture war than the campuses of universities across America — including right here at the University of Nevada, Reno.

Two students found themselves embroiled in the biggest free speech controversies of recent years. Peter Cytanovic became the face of white nationalism when a picture of him snarling, holding a tiki torch at the Unite the Right Rally in Charlottesville went viral. On the opposite end of the political spectrum, graduate Colin Kaepernick went on to the NFL and used his position to highlight police brutality and racial injustice by taking a knee during the national anthem. Both men became incredibly controversial for their speech. There were calls and campaigns for them to be expelled for their opinions.

But regardless of whether you agree with one of them, both of them, or neither, the First Amendment protects both of those men and their opinions from censorship and retaliation by the government.

That’s a good thing. Let me tell you why.

It’s becoming more common to call for lower legal protections for speech — specifically, that we should criminalize “hate speech.” I hear this from the left a lot. I think many on the left would love a world where Mr. Kaepernick could take a knee without any worry the government would force the NFL to fire him, but where a government school would still have the power to expel Mr. Cytanovic. This is a dangerous proposition.

I’m a progressive. It’s not hard for me to choose between white nationalism and racial justice. The first is abhorrent and racist. The other is a demand for equal rights. But what if we gave the government the power to decide which of those men was too hateful to speak? Look at our current president — he called Charlottesville marchers “very fine people,” while reserving his ire for Black NFL players, whom he called “sons of bitches.” Your idea of “hate speech” may not be the government’s idea of “hate speech.” I know mine isn’t. But even if you agree with Trump — are you sure our next president will agree with your worldview? You shouldn’t be.

That’s why I’m a true believer in the First Amendment. I am an anti-authoritarian. And I know that the government has historically wielded its raw power to silence those who speak truth to power. And because I want students everywhere to be able to take a knee without fear of government censorship, I know we have to cherish our robust First Amendment — even for speech that is hateful.

But even though I’m a free speech attorney, I find many of the common tropes and myths about free speech unsatisfying. I’m going to explain why I’m a true believer by debunking three of these common myths, and, in the process, hopefully reveal three practical tips for exercising your free speech rights powerfully and strategically.

Let’s start with one myth we all learned in kindergarten:

Sticks and stones may break my bones, but words will never hurt me.

Does anyone as an adult actually believe this? It’s manifestly untrue. I’m a free speech attorney precisely because I believe that words matter. We cannot protect free speech by denying its power.

So why on earth do we teach this obvious lie to kids? Because humans can be vicious. And when kids are at the receiving end of taunts, we want them empowered, not diminished, in the face of that injustice.

In February, notorious troll Milo Yiannopoulos had a planned speech at the University of California, Berkeley. Students and others in the community went nuts. There were protests. There were riots. Things were set on fire. The administration canceled his talk.

In April, there was a repeat — except this time it was Ann Coulter. She was going to speak, school officials said there would be riots, and they canceled her talk. Both of these individuals then spent 2017 identifying as victims of liberal censorship. And my god the media ate it up — they got more attention for being silenced than they did for trying to peddle actual substantive views.

A goal of professional provocateurs is to provoke the campus community into trying to silence them. Think of campus trolls as schoolyard bullies. Oh, their words definitely hurt. But the real question is: How do we respond to that hurt? A troll wants you to censor them. It feeds into their power and gives them something to sell. You don’t have to play that role.

Yes, there is power in hateful words. But there is also power in sass — in unwillingness to be goaded into a fight or to play the role of censor.

But not all words wound in the same way. That brings us to our second myth:

I often hear younger people say that hate speech isn’t protected by the First Amendment. But that’s untrue. As President Trump’s views of Mr. Kaepernick should make plain, “hate speech” is a flexible concept. Just this week, the Spanish government arrested and charged a man with “hate speech” for calling cops “slackers” on Facebook. That’s what criticizing the government looks like without a First Amendment. “Hate speech” can easily be redefined as speech that threatens the state.

But we shouldn’t only protect speech out of paranoia — there’s an upshot here, too. Our history shows the same First Amendment that protects hateful, racist speech can be and has been used by civil rights advocates to protect historically vulnerable communities.

Charles Brandenburg was an avowed racist convicted of “incitement to violence” for holding an Ohio Ku Klux Klan rally in the late 1960s. The KKK’s lawyers took it all the way up to the Supreme Court, arguing his hateful ideas were protected by the First Amendment. The Supreme Court agreed with Brandenburg that his vicious, genocidal talk about Jews and Black people was constitutionally protected because it only fantasized about future violence. The court decided that before the government can punish speech, there has to be an immediate and specific risk of actual violence to a real person.

In a vacuum, that result might upset you. But at around the same time, NAACP leader and civil rights icon Charles Evers gave a passionate speech advocating a boycott of racist, white-owned businesses. He promised that he’d “break the damn neck” of any activist who broke the boycott. White business owners sued Evers and the NAACP for — you guessed it — “incitement,” arguing that his violent language had led to riots. But the NAACP looked to that Brandenberg case. Those civil rights leaders appealed all the way to the Supreme Court, to be sure that Mr. Evers benefitted from the same rights as a KKK member. And they succeeded.

The court boiled it down to this question: Are we talking about theoretical future violence, or is there an immediate risk of harm to a real person? And while there is nothing equivalent about the KKK and the NAACP, from that point of view, these cases looked the same.

There is reason to be skeptical that the rights extended to a KKK member will actually trickle down to someone like an NAACP leader. The hard truth is that every right in our society first gets distributed to the privileged and powerful. Americans did not get the right to vote at the same time regardless of sex or race. Today, your rights during an arrest — or your right to carry a gun — do not look the same for all races.

But would you say the answer to that uneven distribution of rights is to eliminate the very constitutional protections that enable us to fight the government when it violates them? No. Distributing our constitutional rights equally is a process. The First Amendment is no different.

It’s our job to ensure that everyone benefits from the same level of constitutional protection, that our free speech rights are truly “indivisible.” Our First Amendment is necessary to ensure that those who challenge the government are not silenced — but that’s not sufficient to ensure justice. We have to do the rest of the work.

So, are today’s students up for it? That brings us to our third and final myth:

Public schools and universities are governed by the First Amendment. That means they can’t just keep hateful people off campus because of their views. That means Black and Jewish students have had to face white supremacists on campus; immigrant students have been demonized; women have had to endure campus speakers calling feminism a cancer. I guarantee you that most adults don’t have to pass by a group of people calling for their extermination on their walk into work. I don’t think students are snowflakes. I think you’re badasses.

When I tell you trying to silence or censor political enemies is wrong, it’s not because I think it’s weak. It’s because I think it’s unstrategic and strengthens the force of your opponents. But if silencing hateful speech isn’t an option, what does it look like to be empowered in the face of hate?

Sometimes the answer will be in your numbers. In August 2017, a group of alt-right protesters planned a gathering at Boston Common, labelling it the “Free Speech Rally.” Only dozens of the permit holders showed up. But ringing the Common were 40,000 people standing strong against racism. That huge counter-protest sent a powerful message of resistance: a blizzard of snowflakes. And it made clear the foolishness of one group trying to own the brand of “free speech.”

Sometimes all it takes is a single person to make a powerful statement. A few years ago, a musician, appalled by a KKK rally in his hometown of Charleston, didn’t bother to try to refute the racist ideas — he just followed them around with a sousaphone, loudly oompah-oompahing along. His message of protest was clear — without a single word. The marchers disbanded in short order when forced to peddle their message of hate over a goofy tuba line.

I hope unpacking these myths has helped reveal some truths about how we can strategically exercise our powerful First Amendment rights:

Know your history. Know that the same high-water mark that has protected the most vile and hateful speakers has also protected civil rights and anti-war advocates.

Don’t silence your way out of a debate. Remember that a provocateur wants you to play censor. If you know that a speaker you disagree with — or one you believe is dangerous — is coming to your campus, remember how counterproductive silencing tactics can be.

Dance to your own tune. You can decide when to counter-protest, when to stage an alternative event, and when to ignore ideas unworthy of debate. The very choices you make for confronting — or ignoring — speech you abhor can become benchmarks for how you handle conflict throughout your life.