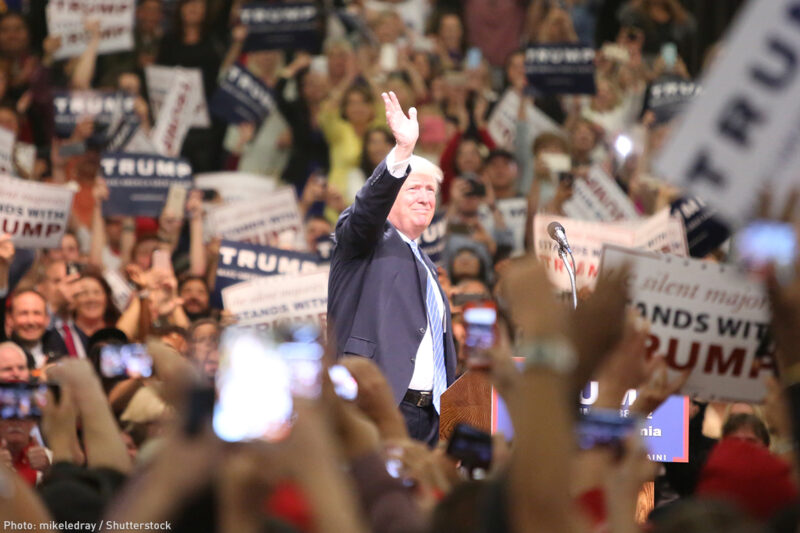 Few organizations have been more engaged in fighting President Donald Trump’s attacks on civil liberties and civil rights than the ACLU. But it’s important to remember that political candidates — including Donald Trump — have constitutional rights, too.

A judge recently held that Donald Trump may have committed incitement when, at a campaign rally in Kentucky last year, he called on his audience to eject protesters who were subsequently manhandled by the crowd. While it’s a closer case than most, I don’t think those words can clear the high bar for what constitutes incitement.

The case arises from a March 2016 campaign rally in Louisville. A video from the event shows a Black woman surrounded by a sea of shouting white faces contorted by fury. Trump yells, “Get ‘em outta here! Get out!” He adds, with notably less enthusiasm, “Don’t hurt ‘em.” The woman is shoved, screamed at, and spun like a top by a multitude of Trump loyalists. It’s a truly scary sight.

The woman, Kashiya Nwanguma, and two other attendees who were similarly ejected from the Louisville rally have filed a lawsuit over the incident. They assert claims of assault and battery against several of the rally’s attendees, and anyone who physically abused them should absolutely be held liable. But the plaintiffs also sued Trump, alleging that his speech incited the other defendants to act violently. They pointed to a history of violence at Trump’s rallies and his prior assurances that he’d cover the legal fees of his supporters who roughed up protesters.

There is no question that Trump’s decision to use his bully pulpit to actually bully protesters and to rile up his crowds against them is morally despicable. But legally, deciding whether what happened in that crowded theater rises to the level of incitement is a trickier task.

This month, a federal judge in Kentucky allowed the case to proceed on the grounds that Trump may have engaged in “incitement to riot” at that rally. (Notably, he allowed the case on two theories — both intentional and negligent incitement — more on that below.)

The decision is troubling from a civil liberties perspective, no matter what you think of Trump or of his policies. Many of our strongest First Amendment protections come from cases in which the government tried to punish individuals for advocating illegal activity.

Incitement charges have been used to jail anti-war protestors, labor picketers, Communists, and civil rights activists. Over time, the Supreme Court learned from these mistakes and adopted a very speech-protective test to determine when incitement has taken place. In Brandenburg v. Ohio, the court ruled that the First Amendment permits liability for incitement only when speech is intended and likely to cause imminent and serious lawlessness. It’s a high bar for a reason, and Trump’s conduct at the rally didn’t meet it.

A brief tour through the history of Supreme Court incitement cases shows how the very same First Amendment rules that protect racist speech also protect civil rights advocates. The Brandenburg test is named after Clarence Brandenburg, an avowed racist convicted for holding an Ohio KKK rally in the late 1960s. The Supreme Court overturned his conviction, despite the rally’s talk of “revengeance” against Jews and Black people, and held that “abstract advocacy of force” was protected speech that did not amount to incitement.

A few years later, in a short opinion relying entirely on Brandenburg, the court struck down another state conviction — this time of an anti-war protester who a cop overheard yelling, “We’ll take the fucking streets later.” The court again held that advocacy of generic illegal action was not incitement.

And perhaps the high water mark for incitement law is NAACP v. Claiborne Hardware, in which the court upheld civil rights icon Charles Evers’ right to deliver “emotionally charged rhetoric” at a 1966 rally. Evers was advocating that a crowd of supporters boycott racist, white-owned businesses, and during his passionate speech, he promised that “we’ll break the damn neck” of anyone who broke the boycott. Citing Brandenburg once again, the court held that there was no evidence “that Evers authorized, ratified, or directly threatened acts of violence” — even if he suggested such violence might be justified.

The stringent Brandenburg test is designed to ensure breathing room for the messy, chaotic, ad hominem, passionate, and even racist speech that may be part of the American political conversation. For that reason, the Supreme Court’s signposts for incitement consist of cases upholding free speech rights in the face of overzealous prosecutions. So we know what the Supreme Court thinks incitement isn’t more than we know what they think it is.

From a lawyer’s point of view, there is something fascinating about Donald Trump: he appears determined to make us dust off our law books and reexamine basic constitutional precepts. Now it’s incitement’s turn.

So we have a theater, a frenzied crowd, an assault on a vulnerable person, and a demagogue. Why doesn’t this qualify as incitement?

First, the notion of “negligent incitement” is plainly unconstitutional, and, under Brandenburg, a contradiction in terms. Negligent conduct is careless conduct, not intentional conduct. The law makes it clear that if Trump did not intentionally advocate violence, he cannot be held liable for incitement.

Even setting negligence aside, however, the facts we have also don’t add up to intentional incitement. Start with the words themselves: “Get ‘em outta here.” As my colleague Rachel Goodman and I have previously written, the First Amendment does not entitle you to protest at a politician’s privately run rally. So by protesting in Louisville, Nwanguma and her two co-plaintiffs were subject to lawful removal. Therefore, Trump’s words do not explicitly refer to any unlawful action — he had a right to tell them to leave. And remember that Trump added, from the lectern, “Don’t hurt ‘em.” At face value, this doesn’t appear to pass that high bar for incitement. Indeed, Trump explicitly disavowed violence.

But the plaintiffs did a good job marshaling their facts, which is what makes this such a close case. Since incitement is in part about state of mind, the fact that Trump previously shared his hope that people “knock the crap outta” protesters and offered to pay the legal fees of those who did has real relevance. And interestingly, the judge cited the words uttered right after “Get ‘em outta here”: Trump added, “I can’t say ‘go get ‘em’ or I’ll get in trouble.” The judge held that this was Trump’s way of conveying, with a wink and nod, a desire for violence to his supporters.

The final inquiry is whether Trump’s words were actually likely to incite violence. Put another way, would a reasonable person have heard “Get ‘em outta here” as code for “violently assault those protesters”? Last week, one of the individual defendants in this case actually countersued Trump, arguing that if he’s found liable for assault, Trump should pay his legal fees — as the president does appear to have promised. So we have one listener who claims violence was what Trump wanted. (Of course, this argument would conveniently relieve him of responsibility for his own conduct.)

But the First Amendment requires that we focus fault on those who act, rather than on those who merely speak, absent extraordinary circumstances. We need to be extremely wary of granting government the power to shut down a speaker because of the power of her words. We need to ensure a world where Charles Evers can get heated and where street activists can sharply criticize the police, without worrying that someone in the audience will hurt someone and then try to blame the speaker.

Some people have cheered the judge’s ruling in this case — perhaps gratified that Trump’s ugly campaign is finally getting some comeuppance. It’s certainly understandable why reasonable people could see those Trump rallies as racist, sexist powder kegs. I know that many Americans fear we’re slipping into fascism, and see the violent euphoria that has sometimes emerged at Trump rallies as a harbinger of a moment from which our democracy won’t return. I worry, too.

But if we really want to protect against that moment, we cannot do it by weakening our commitment to constitutional values. So many of the high water marks of the First Amendment were etched during the civil rights era. It is never a good time to alter the law so that more speech can be punished. Political speech should qualify as incitement only if it is unequivocally and inherently a request for violent and unlawful action.

“Get ‘em out” just doesn’t meet that bar.