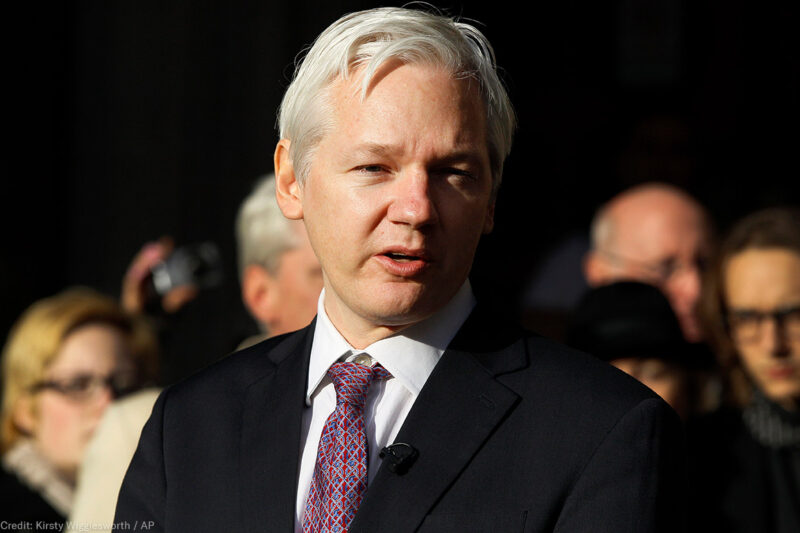 What to make of the indictment of Julian Assange?

The Justice Department hasn’t crossed the line that many feared it would: It hasn’t charged Julian Assange for publishing truthful information about matters of public concern. That kind of prosecution would have been unprecedented in the nation’s history and would have opened the door to criminal investigations of other publishers. Instead, the indictment accuses Assange of having conspired with Chelsea Manning to hack a government database. Hacking government databases isn’t protected by the First Amendment, and it isn’t a legitimate part of investigative journalism.

But the indictment is troubling nonetheless. It characterizes as “part of” a criminal conspiracy journalistic activities that are not just lawful but essential to press freedom. And there is reason to be concerned that the charge of “Conspiracy to Commit Computer Intrusion” that was unsealed today may not be the Justice Department’s final word on the matter. There are already reports that the government expects to bring additional charges against Assange once his extradition has been completed.

It’s not clear that the Justice Department will be able to establish a conspiracy to violate the hacking statute, as some have noted. Though Assange allegedly agreed to help Manning crack a password, cracking that password apparently wouldn’t have allowed Manning to access more files than she could already access—only to access the same set of files under a different username. A few years ago, the Obama administration considered filing charges against Assange but ultimately decided not to. From this indictment, we can guess at some of the difficulties that might have led it to abandon the effort.

If the Justice Department had filed an indictment focused more narrowly on the alleged hacking, none of this would warrant much comment. The Justice Department would present its evidence; Assange would defend himself; and few people would raise concerns about the prosecution’s implications for press freedom. The problem is that the indictment seems to have been drafted not just to justify the prosecution of Assange but to tar legitimate journalistic activities by association with Assange’s alleged crime.

The indictment characterizes everyday journalistic practices as part of a criminal conspiracy. Cultivating a source, protecting a source’s identity, communicating with a source securely—the indictment describes all of these activities as the “manners and means” of the conspiracy. The Justice Department says that Assange and Manning communicated using an encrypted chat service, but most national-security journalists communicate with sources using encrypted channels. It says that Assange and Manning “took measures to conceal Manning as the source of the disclosure,” but taking measures to protect their sources’ identities is something that national-security journalists do all the time, for good reason. It says that Assange created “a special folder on a cloud drop box of Wikileaks” to allow Manning to share files with him, but many major news organizations use SecureDrop and other similar software to allow sources to share files with them securely.

This is to say that much of what the Justice Department characterizes as the “manners and means” of criminal conspiracy is just ordinary, everyday, and constitutionally protected journalism. In fact so much of the indictment is dedicated to describing legitimate journalism that a reader can’t help but wonder whether the Justice Department believes the alleged hacking was necessary to support an indictment here, or just sufficient.

The indictment is troubling for another reason, too. While Assange wasn’t charged with violating the Espionage Act—the World War I-era law that criminalizes unauthorized dissemination of “national defense information”—the indictment states that the purpose of the conspiracy for which he was charged was to violate the Espionage Act. This raises the question whether this indictment is just an opening salvo aimed at easing the path for extradition, with more substantial charges to be added later. It’s striking that after years of characterizing Assange as an agent of a hostile intelligence service, and worse, the U.S. government has now charged him only with trying, unsuccessfully, to crack a password.

We knew before this indictment that the current administration was threatening a more aggressive stance toward investigative journalism. James Comey, who was then the FBI director, documented a February 2017 meeting during which President Trump complained to him about leaks of classified information. Comey told the president that he was “eager” to identify the leakers and “would like to nail one to the door as a message.” Evidently Trump wasn’t satisfied. An appropriate response, Trump told Comey, would involve “putting reporters in jail.”

This indictment doesn’t cross that line. But no one should be celebrating this shot across the bow of press freedom.