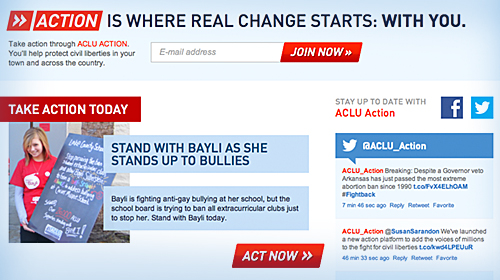 For nearly a century, the ACLU has been fighting back against encroachments on our civil rights and liberties wherever they take place—in courtrooms and classrooms, in the White House and in Congress. But today, like so many things in our lives, threats to our personal freedoms are moving online. That’s why the ACLU is going digital in the fight to protect them.

Today we’re thrilled to announce the launch of ACLU Action—the latest chapter in the ACLU’s continuing evolution. ACLU Action is a cutting edge online organizing and digital campaigning platform that will allow you—along with hundreds of thousands of other ACLU supporters around the country—to put yourself in the center of the ACLU’s work.

While the advent of digital communication tools like email, Facebook, and Twitter have given new openings to those who hope to curtail our personal freedoms, they also provide powerful new tools for those of us who are fighting back. Whether it’s making phone calls or sending emails, grassroots constituent pressure is the best way to encourage politicians at a local, state, and federal level to protect our civil rights and liberties. Through ACLU Action, you can use these new digital tools to make your voice heard in a way that hasn’t been possible until today—and stand up to the ever-growing threats to some of our most fundamental American values.

21st-century threats to our freedoms require a 21st-century response. We hope you’ll become a part of our effort to protect civil rights and liberties in the digital age. Take the first step with ACLU Action today.