On July 9, 2013, Myriad Genetics, along with the University of Utah Research Foundation, Trustees of the University of Pennsylvania, HSC Research and Development Limited Partnership, and Endorecherche, Inc. filed lawsuits against Ambry Genetics and Gene by Gene, two laboratories that began or have proposed to begin offering genetic testing of the BRCA 1 and 2 genes.

These cases arose in the aftermath of a unanimous Supreme Court decision invalidating patent claims held by Myriad Genetics that created a monopoly on clinical testing of the BRCA1 and BRCA2 genes. Myriad asserted patent claims that were not challenged in the Supreme Court litigation.

Myriad filed an appeal in the U.S. Court of Appeals for the Federal Circuit. The ACLU and others filed two amici briefs. 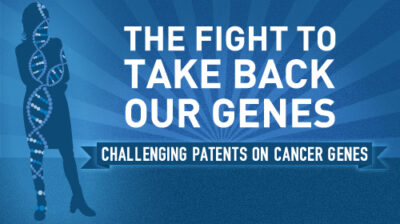