The American Civil Liberties Union, ACLU of South Dakota, and co-counsel Stephanie E. Pochop have submitted charges to state and federal agencies against Taco John’s of Yankton, Inc. and Taco John’s International Inc. The discrimination charges were filed on behalf of Tyler Brandt, a 16-year-old employee who was forced to wear a “Gaytard” name tag while working.

According to the discrimination charge, the night-shift manager at Taco John’s forced Tyler to wear a name tag that read “Gaytard” on the night of June 23, 2014, and loudly addressed Tyler as such in front of customers for the duration of his shift. Brandt returned to the restaurant the following day to resign from his position.

The discrimination charge, which was filed with the federal Equal Employment Opportunity Commission (EEOC) and the North Dakota Department of Labor, alleges that Taco John’s violated Title VII of the Civil Rights Act of 1964 and the South Dakota Human Rights Act.

Hello, My Name Is NOT "Gaytard." How May I Help You? 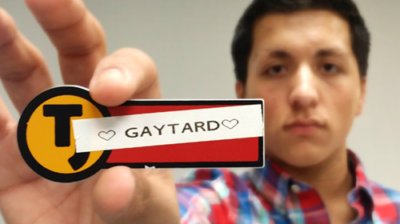 Hello, My Name Is NOT "Gaytard." How May I Help You?
Support our on-going ligitation and work in the courts Donate now