The American Civil Liberties Union and the ACLU of West Virginia have filed a lawsuit on behalf of a mother and her daughters who attend Van Devender Middle School, claiming that the school’s practice of separating boys and girls into different classes is unlawful, based on discredited theories, and has impaired the girls’ education.

School officials have implemented strategies that have been proven to be ineffective in promoting academics and that are rooted in sex-based stereotypes. For example, boys are permitted to move around the classroom to exert energy and have rooms that are lit more brightly than the girls’, based on the mistaken notion that boys see better in bright, cool light. The girls are encouraged to sit quietly and share feelings in dimly lit rooms.

One of the girls represented in the lawsuit has attention deficit disorder, and is frequently reprimanded in class and sent to the boys’ room as punishment. Once there, she is not permitted to take part in physical or academic activities with the boys, and instead is told to face a wall. The second sister is legally blind and has repeatedly requested that the lights in her classroom be made brighter, as they are in the boys’ classroom. She was instead told to sit by a window, which was inadequate, and she consequently required a stronger prescription for her glasses and contacts. The third girl in the family learns best by reading and writing things down. However, when she asked for more time to take notes and copy slide presentations, she was told that girls learn best through auditory rather than visual input. Her grades have gone down as a result.

The girls’ parents reached out to the ACLU when they became aware of the nature of the sex separation at Van Devender as the result of ACLU’s “Teach Kids, Not Stereotypes” campaign questioning stereotyped single-sex programs nationwide.

Status: Victory! Settlement reached. The Wood County Board of Education has agreed to abandon single-sex education for the next two school years.

Do you or a child in your family attend a public school with single-sex programs? Tell us about it »

Back to Coeducation in Wood County: Judge Rules School May Not Separate Students by Sex This Year

Back to Coeducation in Wood County: Judge Rules School May Not Separate Students by Sex This Year 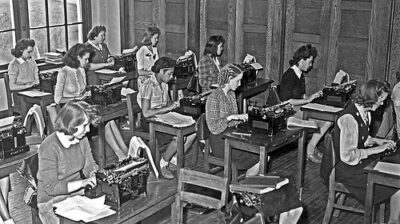