The ACLU and ACLU of South Dakota have filed a federal lawsuit challenging three South Dakota laws that target full-throated advocacy and protest.

The laws—two criminal laws, South Dakota Codified Laws §§ 22-10-6 and 22-10-6.1, and the newly-enacted “Riot Boosting” Act—prohibit “boosting,” “encouraging,” or “advising” anyone at a protest where a fight erupts “to acts of force or violence.” This could extend to a tweet encouraging protesters to “Give it all you’ve got,” or simply encouraging others to attend a protest where violence ends up occurring.

These laws threaten criminal penalties of up to 25 years and significant fines for protesters and social justice organizations that encourage or organize protests, particularly protests against the Keystone XL pipeline.

The ACLU filed the lawsuit on behalf of four organizations: the Sierra Club, NDN Collective, Dakota Rural Action, and the Indigenous Environmental Network; and two individuals: Nick Tilsen with NDN Collective and Dallas Goldtooth with Indigenous Environmental Network. They oppose the Keystone XL pipeline for several reasons, including but not limited to the government’s and companies’ failure to consult with tribes regarding the pipeline and the threat it, and the fossil fuel industry generally, poses to the environment.

Plaintiffs have provided, and plan to continue providing, funding, training, and other advice and encouragement to individuals who plan to protest the Keystone XL pipeline. They also advocate against the use of violence and plan to advise and encourage others to protest the pipeline through peaceful methods. All fear prosecution under the criminal statutes, and imposition of civil liability under the Act.

The lawsuit asserts that the laws violate the First and Fourteenth Amendments to the Constitution by targeting and chilling protected speech, and by failing to adequately describe what speech or conduct could subject protesters and organizations to criminal and civil penalties.

The Riot Boosting Act, which was passed during the 2019 South Dakota legislative session, gives the state the authority to sue any individual or organization for “riot boosting,” or encouraging a protest where acts of violence occur. The law mirrors two existing state laws that criminalize similar speech. Under the laws, individuals and organizations—regardless of their intent to incite violence, the likelihood that their speech or conduct would result in violence, or the imminence of the intended violence—could be subject to civil and/or criminal penalties. Moreover, the laws do not clearly describe what conduct or speech is considered “riot boosting” or “encouraging” a riot. The ACLU argues that such vague and broad language invites arbitrary enforcement, will chill protected speech, and will result in indiscriminate targeting of peaceful organizers.

In addition, the Act imposes liability on those who “solicit” or “compensate” others “to be arrested,” which could encompass things like offering to post bond for an individual who was falsely arrested at a protest. And the Act also creates a “riot boosting fund,” which will be filled with damages paid by those who violate the Act and may be used to cover costs of pipeline construction—that is, the Act may force protesters to fund precisely that which they are protesting.

The case, Dakota Rural Action v. Noem, was filed in the Rapid City-based Western Division of the U.S. District Court for the District of South Dakota. Because the challenged laws expose the plaintiffs to immediate and irreparable harm, they are asking the court to immediately prohibit the state from enforcing these laws as the case goes forward. 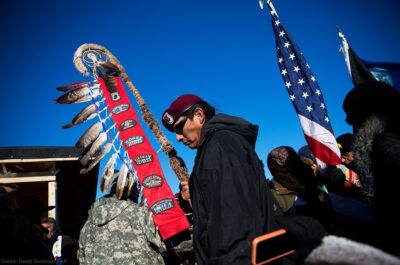