On February 13, 2019, the American Civil Liberties Union and the ACLU of New Hampshire filed a federal lawsuit challenging a New Hampshire law that unconstitutionally restricts the right to vote for students, young people, and those new to the state.

The lawsuit was brought on behalf of two Dartmouth College students who may be required to pay for New Hampshire driver’s licenses if they vote in New Hampshire. If they don’t, they could face civil penalties. The law, HB 1264, burdens their right to vote and acts as a “poll tax” by intending to require new voters to shift their home state driver’s licenses and registrations to New Hampshire — which can add up to hundreds of dollars — solely for exercising their right to vote.

The lawsuit cites a violation of the 26th Amendment, which lowered the voting age to 18 in 1971. Its aim was not only to allow young people to vote, but also to encourage voting by eliminating obstacles.

College students’ right to vote in New Hampshire has been under attack for decades. As far back as 1972, the ACLU successfully challenged a law that tried to stop college students from voting if they planned to leave the state after graduation.

The State filed a motion seeking to have the case dismissed, which was denied. The case is ongoing. 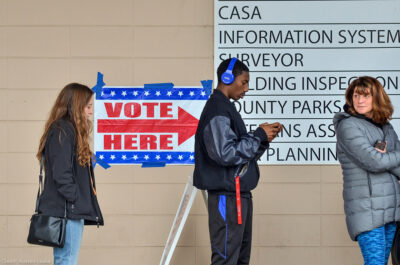