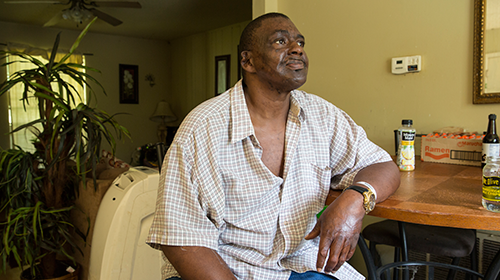 Willie Hughes says he survived EMCF because of luck and his family. “It’s a nightmare on Elm Street, but it’s for real,” he said. Before his release in 2013, Willie saw an active trade in weapons, drugs and alcohol at EMCF.

“People [threw] pounds of weed and dope over the fence and it’s out there for everybody to see,” said Willie. “The mental health counselors knew. The warden knew and nobody cared.” Willie saw staff pimping out prisoners, and prison nurses and doctors taking prisoner medication they couldn’t afford themselves. “I gave up,” said Willie. “One of them gangsters was going to kill me or one of them guards was going to kill me.” He says he feared for his life; stabbings were so common, the prison shut down the cafeteria to limit prisoner interaction. Willie attributes much of what he experienced at EMCF to the private prison corporations managing the prison – formerly the GEO Group and now MTC (Management & Training Corporation). They manage to make a profit, so there’s little incentive to pay the staff properly or ensure adequate health care for the prisoners. Willie almost lost his toe, his leg and only occasionally received the insulin he needed to control his diabetes. He told a fellow prisoner “when I get out of here, I’m going to write a book about this place.” The prisoner told him not to bother because nobody would believe him.