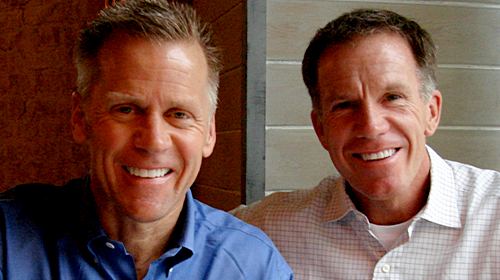 Tom, 57, grew up in Lincoln. He attended the University of Nebraska for both undergraduate and medical school. Tom moved away from Lincoln to do his Family Medicine residency in Kansas City, Missouri, where he met Randy, now 61, who grew up in Missouri. The couple have been together for over 30 years.

The couple lives in La Jolla, California, but keep strong ties to their family in Nebraska, Missouri and other parts of the country. Randy is a CPA who currently works as Chief Financial Officer for a company based in Kansas City. Tom is a practicing Family Physician and is part of the teaching faculty at a residency program in San Diego. In addition to having extended family in Nebraska, the couple also owns commercial property in Nebraska.

They are both active in the Methodist church where they teach Sunday school classes. They also have two shelter dogs. They’ve had the tug and pull of government on their relationship several times. They were first married in 2004 when the city of San Francisco allowed marriages for same sex couples for a short period. That marriage was annulled by the state of California but they were finally able to get married in 2008 in La Jolla, California.

When the couple comes to visit family or checks on their commercial property, they effectively become unmarried.

Unfortunately, America’s patchwork of marriage laws continues to create difficulties for the couple. While they can file a joint federal tax return, Nebraska has informed them that for 2013 they would need to file as single individuals to report Nebraska sourced income on the properties they jointly own. They are challenging this decision.

“Essentially, in addition to preparing our joint Federal income tax return, I would need to prepare mock federal income tax returns as single individuals for each of us to satisfy Nebraska. It is an undue burden for married same-sex couples who would need to incur significant additional professional tax preparation expenses. It is demeaning to have Nebraska make us say we ’single’” — Randy