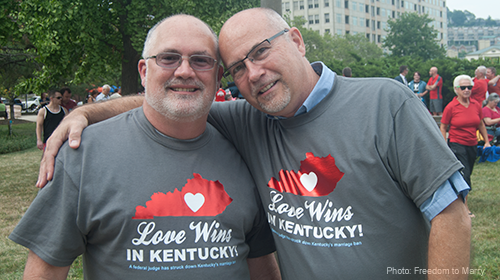 Tim Love and Larry Ysunza of Louisville have been together for 34 years. They traveled to Vermont in 2000 to get a civil union, but have waited to marry until they can do so in their home state of Kentucky.

Having been through health scares and realizing the importance of the legal protections that marriage affords, Tim and Larry are challenging Kentucky’s discriminatory marriage bans.

In the Summer of 2013, Tim was diagnosed with two blockages in his heart and advised by his doctor to go to the hospital immediately. Faced with emergency surgery and no legal protections, Tim and Larry were forced to rush to draw up papers to ensure that Larry would be able to make medical decisions for Tim should he become incapacitated. The paperwork was literally finalized as Tim was heading into surgery. That experience and the reality of future surgeries and unforeseen health needs prompted Larry and Tim to stand up against Kentucky’s discriminatory marriage bans.