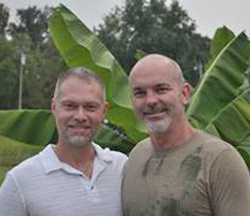 Like most small town residents, Tim Kee and Rick Wade spend a lot of time engaged in community activities. Having been together for 15 years now, they are well-recognized and regarded in their hometown of Marion. Though they kept their relationship secret when it began, travelling to St. Louis and environs on their first several dates, they no longer try to hide that they are a couple.

For Rick and Tim, tradition and stability is critical. They live in a house built on land that was Rick’s great-great-grandparents’ homestead that was passed on to Rick by his grandmother, a house that they have made into their home. Tim was born and raised in nearby Johnson City where he now teaches in the elementary school Previously, Tim taught in the high school in Johnson City. Rick is an office manager for an optometry practice.

Among the values that Tim and Rick have in common is their faith. Today, they attend (and are active in) the church in Johnson City where Tim was baptized and confirmed. Faith plays a critical role in their relationship and in their life. They attend church whenever and wherever they travel. And, they find the congregation to be an extended family, consoling them in bad times and celebrating them in good times.

On June 2, 2011, Rick and Tim went to the Williamson County courthouse to get a civil union. The experience, by and large, was rewarding. Since they were only the second couple to receive a civil union, the County Clerk insisted on coming out to help them – saying that she needed to learn the forms and the process for herself. But they realize that a civil union is not equivalent to being married.

“No one grows up hoping to be ‘civil unionized'” says Tim. “At the end of the day, it’s just not the same as being married. We want our love and our relationship to be recognized as a marriage – it is only then that we can stop explaining to others the differences between a civil union and a marriage.”

In 2010, Tim helped to organize a 5k race to raise money for the school. Rick volunteers his time to help Tim make the event a success. Only marriage fits Rick’s understanding of his relationship with Tim and their place in their community. “Tim and I do our part in our community. We’d like to be seen as another average couple who love one another and want to spend our lives together.”