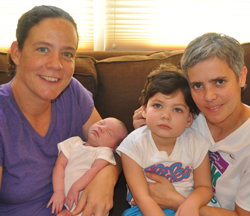 Tanya Lazaro and Elizabeth “Liz” Matos live on Chicago’s far Northwest side with their two children, Jaiden (2), and a newborn daughter, Sophia. Like many Chicago families, their choice of a home neighborhood was guided by family connections – the couple lives in a two-flat shared with Tanya’s aunt, just three blocks from the home where Tanya’s mother grew up. When they walk Jaiden to the park or around the neighborhood, they often encounter friends and acquaintances that Tanya has known for her entire life.

Since meeting more than fifteen (15) years ago, Tanya and Liz have built a life together, based on what they describe as their “shared values and a common commitment to one another and their family.” Tanya knows a lot about commitment and service – after finishing college, she took a job teaching in Chicago Public Schools. After a year in the classroom, she decided she wanted something that was “easier,” so she joined the Chicago Police Department, where today she is a Detective in the Violent Crimes Unit. “It is remarkable that Tanya risks her life serving and protecting the people of Chicago, but Illinois does not fully recognize the family we have built together,” says Liz.

Liz’s family is from Puerto Rico, the youngest of 6 children, she was the only born in Chicago. Today, she works as a senior software analyst at a software company that supports trading firms in downtown Chicago.

Liz and Tanya focus their lives today around their two children. They describe Jaiden and Sophia as their “greatest source of joy and satisfaction” for the two of them, a description on which most young parents would agree. Tanya and Liz are fortunate to be able to arrange their work schedules so that they work staggered shifts so that one of them is always home with the children. Their home is filled with toys, books and other items for children – making it easy for anyone visiting to see their priorities in life on display. They are a couple who put family first.

When Illinois approved civil unions, Tanya and Liz talked about seeking the legal benefits of such a union. In the end, they decided that a civil union was not enough for them. “We didn’t want to get a civil union just to have some legal benefits and protections,” says Tanya. “We love each other; we are committed to one another – anything short of marriage just does not recognize that love and commitment.”

Liz and Tanya look forward to the day they can get married.