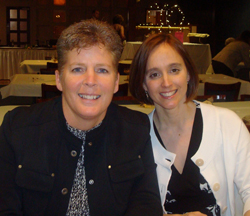 When they first met, Suzanna Hutton and Danielle Cook could not imagine that they would be spending the rest of their lives together. Teachers in Bloomington, Illinois, Suzie says that she and Danielle were almost “complete opposites.” After more than a decade together, now they want to have the dignity of being recognized as married in their home state. They have celebrated their love and relationship with friends and family members through a commitment ceremony. And, in June of 2011, they entered into a civil union.

Danielle and Suzie both feel that the civil union “falls short” of being married, sometimes because it is not respected and often because it is not understood by others. Suzie notes, for example, that when she goes to a doctor’s office, a dentist office or another professional service, she is exasperated by the forms she is asked to fill out.

These forms ask the patients or customers to designate whether they are married, single, widowed or divorced – the expected and easily recognizable choices. But, Suzie notes, a year after civil unions became the law of the land in Illinois there is no place to record their civil union relationship status.

Maybe more troubling is that many people – even well-educated and well-intentioned people – don’t always know how to react to someone with a civil union. In the schools where Suzie and Danielle both now work, teachers gather to welcome new staff and celebrate births and weddings. At the end of the of the 2010-2011 school year, a well-intentioned staff member stumbled over trying to announce that “Suzie was getting a…having a…civil union something.” In the fall of 2011, a staff member at Danielle’s school also had trouble wording the civil union announcement. Not knowing what to do and without any advance planning, Suzie and Danielle reached for the same tool – humor. They both followed the mixed response by saying that now their relationship was “civilized.” The line was met with laughter.

“Our relationship status should not be the source of laughter,” says Danielle. “We love and care for one another. We share good news and bad news, happiness and sadness. We deserve to be treated with the dignity that only marriage affords.”

“That is why being married matters so much,” she adds.

“Marriage is just the expectation that we were raised with – and I want it for myself,” she adds.