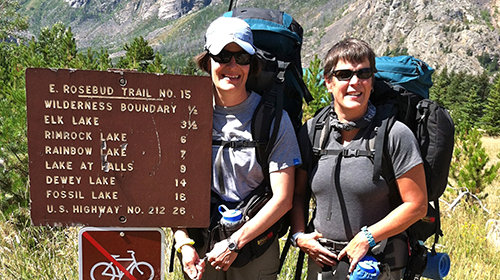 Sue and Adel have been a couple for 16 years. They live in Helena, where Sue is retired from the U.S. Army and Adel works for the Montana Department of Military Affairs.

The couple met for the first time in 1995 at Montana’s first Pride event in Helena, but did not really get a chance to know one another until reconnecting at a 1996 golf tournament. From that point on, however, it became quickly evident that they were meant to be together. Adel recounts that shortly after that tournament she went on a backpacking trip with friends in Utah. After a 15-hour drive home to Butte, she could have collapsed but only wanted to drive one more hour to see Sue in Helena.

Adel, 44, and Sue, 49, married earlier this year in Washington State and are hosting a celebration of their vows with family and friends this October in Helena. Still, they want their marriage to be recognized by the State of Montana.

“I’m a fourth generation Montanan,” says Adel, who grew up in Philipsburg. “I think it’s very important that our state jump on board with marriage equality.”

Sue, who served 28 years in the Army, agrees. “If I’m an American, I’m supposed to have the same rights as everyone else. So why don’t I?