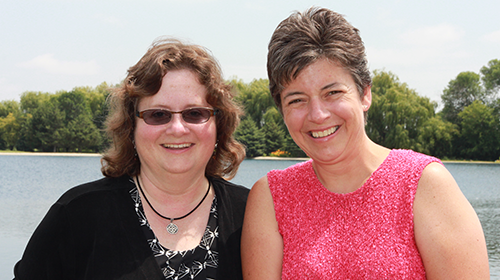 Lifelong Wisconsinites, Stacie and Julie met when they were working together. Julie was born and raised in Green Bay and Stacie grew up in Eagle River. Julie is a Gulf War veteran and was a First Lieutenant in the Army, where she served in the reserves and received two commendation medals for her service to our country. Julie now serves as the Director of the Adult Program at the Cerebral Palsy Center in Green Bay, where she has been for 20 years. Stacie is a lecturer for University of Wisconsin – Green Bay in Human Development/ Psychology where she has been for 21 years. They attend the United Church of Christ Union Congregational, a church that strongly values inclusion, non-judgment, and welcoming all to participate in their faithful community.

Julie and Stacie’s family, both near and far, have been very supportive of their relationship and want to see them happily married. They have two adult daughters from Stacie’s previous marriage, both of whom have one child. One of their daughters lives in Milwaukee and has a 6-month-old daughter, and the other lives near them in Green Bay and has a 9-year-old son.

When they heard marriage licenses would be available to same sex couples on June 9, Stacie and Julie rushed to the county courthouse with their younger daughter. They arrived at 8am and county staff said they weren’t doing marriages just yet and told all the couples who had gathered to go home. Some of the couples, including Stacie and Julie, decided to stay at the courthouse to see what happened. Two hours later the county staffers said they would indeed issue licenses to same-sex couples, and they could also obtain a waiver so they could get married that same day. As they made their public commitment to each other on the courthouse lawn, people were beeping their horns and some got out to watch the ceremonies. It was an amazing experience for the longtime couple to be able to get married and partake in such a joyous moment in Wisconsin’s history.

Marriage and family matter to Stacie and Julie, and they want to be treated just like any other married couple in Wisconsin. The daily indignities of being treated as housemates, rather than a family, can really take their toll on the two. Stacie is currently working on her Ph. D., and Julie’s company does not provide domestic partner benefits. This means that Stacie has to work full time while completing her doctorate in order to keep herself fully insured, but this would not be the case if they were a straight couple. Marriage would give this longtime couple the peace of mind and security of being recognized as a family.