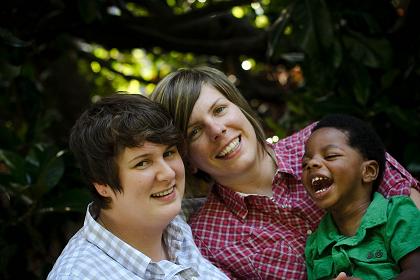 Shana and Megan are lifelong North Carolinians who met four years ago through mutual friends. Shana, 29, works at an HIV services nonprofit and Megan, 32, works as a home care provider for a woman with severe physical and developmental disabilities. In 2010, Megan adopted Jax, who was living in a group foster home in another state with 15 other children. Born to a mother with alcohol and substance use issues, Jax has cerebral palsy and suffered from reduced oxygen to the brain at birth. While Jax was set back further by a lack of early intervention treatments, Shana and Megan acted quickly to get him the services and treatments he so badly needed as soon as they brought him home. Now 4 years old, Jax is doing very well in pre-school and is learning to communicate using a computer.

In the summer of 2010, Jax had to have surgery. The fact that Shana doesn’t have a legal relationship to Jax made his hospital stay much harder on the family than it had to be. They had planned to take turns spending the night at the hospital with Jax, but the hospital didn’t allow Shana to stay past visiting hours without Megan also being there. With no breaks for a good night’s sleep, Megan stayed at Jax’s side around the clock for an exhausting five days in a row. “Megan didn’t sign up to be a single mother,” said Shana. “All I want is to be able to fully take on my responsibility as Jax’s mom too.”