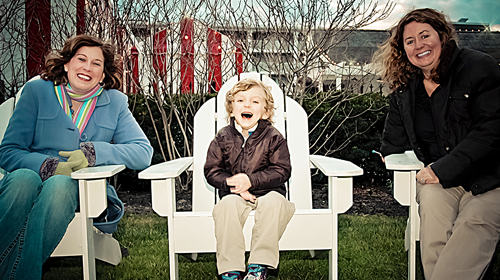 Sandy and Christine’s life is centered around their family, and in particular, their five-year-old son, Henry, who is in kindergarten. After Henry’s birth, Sandy went back to work on a reduced schedule so she could spend more time with him. Sandy and Christine’s extended families live nearby (Drexel Hill and King of Prussia), and they feel blessed that their son is able to spend so much time with his grandparents, aunts, and uncles, and to play regularly with his many cousins. Sandy and Christine’s home is the center of family life for all of their relatives and is filled with loved ones from both sides of the family at every holiday.

Sandy and Christine would like to get married because they love each other and have built a life together, and want their family to be treated no differently than any other. They hope that they will be able to marry in Pennsylvania by the time Henry is old enough to ask questions about it. Sandy and Christine have hired an attorney to draw up wills and powers of attorney to provide them with some legal protections but they know that their lawyer can’t draw up documents that will give them most of the protections and obligations of marriage.

Last year, Sandy was diagnosed with a life-threatening cancer. During this difficult time, the couple had to deal with the additional stress of not knowing whether Christine would be able to get information from medical staff about Sandy’s condition or be able to make medical decisions for her if necessary, given that she wasn’t a legally recognized family member. Dealing with major surgery and chemotherapy reinforced for them the need for the security of marriage. They also realized that their situation would have been even scarier and more precarious for the family if Sandy had fallen gravely ill before Christine’s adoption of their son was final—a process that took about a year to complete. If they had been able to marry legally in Pennsylvania before Henry was born, Christine would automatically and immediately have been recognized as a parent to any child born to her spouse.