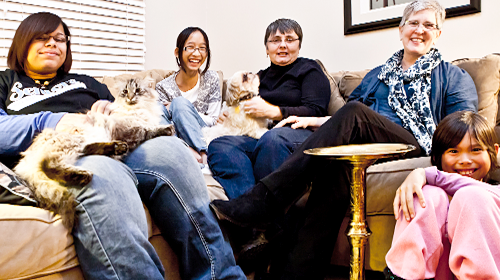 In a marriage ceremony 16 years ago, Susan and Sally pledged “til death do us part” in front of God, their family and their friends. Unfortunately for this couple, a diagnosis of breast cancer and Nebraska’s marriage ban means a lack of security for them and their children.

Sally, 58, and Susan, 53, met through work 17 years ago. They both have a background in training and development. A year after they started dating, the couple got married at North Side Christian Church in Omaha. The couple wanted to begin a family and adopted a little girl, Ella, in 2001. Because of Nebraska’s laws, only one of them could be the adoptive parent.

Concerned about their daughter being denied the protections of having two legal parents, Susan and Sally then made the very difficult decision to leave Nebraska and their families behind. They moved to California where Sally could become a joint parent to Ella and where they could jointly adopt a second little girl, Jaden. Susan and Sally registered as domestic partners and became legally married in 2008.

The couple had a family that was legally protected and jobs at UC Davis. The Great Plains called them home, however, and in 2010 they moved back to be closer to their aging parents, siblings, cousins and extended family. In spite of the legal recognition in California, they missed their family and wanted a larger family for their children. Ella is currently 13, Jaden 10, and their family now includes Kayla, now 18, for whom Sally and Susan are legal guardians.

In January 2013, Sally was diagnosed with stage three breast cancer. She had surgery, chemo and radiation. The “very rough” treatments forced her to give up working. In June 2014 the doctors discovered the cancer had returned and spread to her spine. She currently has stage four breast cancer. The family is doing their best to get their affairs in order, knowing that in the eyes of Nebraska, the two women who have spent nearly two decades caring for each other and their children are legal strangers.

Planning for a single-family income, they’ve moved into a smaller home. Susan won’t be covered by Social Security survivor benefits, though the children will be. The options for Sally’s retirement plan are also impacted because the couple isn’t considered married. Susan will have to pay inheritance tax on half of the property they share – including their family home. Susan and the children could be left without a way to stay in their home should Sally die.

“We have said publically before God, our family and our friends that we love each other and are committed to one another and our children. At this moment, I want to spend time loving my children and my wife while knowing that should I die, they will be cared for.” — Sally Waters