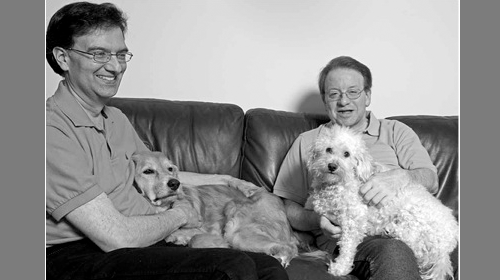 Milwaukee. Roy, 56, and Garth, 58, have been together 37 years. They met through mutual friends when they were students at the University of Wisconsin-Milwaukee, and got together on Election Day in November 1976.

“Garth voted Carter and I voted Ford,” Roy recalls. “I was really rooting for Betty.”

Roy, who’s lived in Wisconsin since age 12, has worked as an editor at UWM for 32 years. Garth, a native Wisconsinite, was laid off last spring from his customer service position, but is temping for his old employer as he looks for a new job. The couple attends a United Church of Christ church and has two dogs, Daisy and Winston.

“We have a lot in common, and we always have a lot to talk about,” Garth says. “Roy is very gentle and giving, and he’s always been very honest and forthright.”

They had a church commitment ceremony in 2009 with only a couple of friends, their pastor and his wife. Looking back on it, Roy says, “it’s bittersweet because it felt like something we were doing in secret.”

A few years ago, Garth was diagnosed with lung cancer and had to have most of his right lung removed. At the suggestion of Garth’s surgeon, they had papers drawn up, granting Roy power of attorney. Following Garth’s surgery in August 2011, he had a medical emergency, and his doctors put him into a medically induced coma to allow his body to stabilize.

Garth’s coma lasted more than three weeks. During that time, Roy included Garth’s father in meetings with the medical team to discuss his treatment. The surgeon felt confident Garth would recover, and he was right. Today Garth is still living cancer-free.

But Garth and Roy later discovered that while Garth was in the coma, his father tried to override Roy’s power of attorney to take Garth off life support. Garth was so hurt and upset that he no longer speaks to his father.

“What upset me most wasn’t that he wanted to take me off life support,” Garth says. “What hurt the most was that my father still didn’t see Roy as my spouse after all this time.”