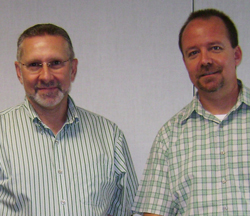 Ross “Randy” Walden and Robert “Bob” Carey live in Springfield, Illinois where Randy works for the Army National Guard and Bob works for a major power company. Randy has a Ph.D. in Health Administration. His work for the military is not a surprise since Randy is a veteran of the United States Army, where he received a number of letters of commendation, a good conduct medal and an overseas service ribbon for his work as a Russian translator.

Bob and Randy had their first date at a local Mexican restaurant – a place they still frequent to this day. They soon will celebrate seven years together as a loving, committed couple. They share many interests together. They care for rescue dogs and cats and share a deep love of the outdoors, spending many weekends camping near Springfield and across the Midwest. Randy and Bob also are active in their local synagogue. They are welcomed at their house of worship, and Randy has been asked to serve in positions of trust and authority for the congregation.

For Randy, meeting Bob was part of a process of recovery after he lost his long-time partner Curt to cancer. That experience made all too clear the harm that can arise from not having one’s loving relationship recognized.

As Curt was battling cancer, Randy was always present and involved in his care. When things turned for the worst, Randy took Curt to a local Springfield hospital. Hospital personnel regularly quizzed Randy about his relationship to Curt, and ignored Curt’s health care power of attorney naming Randy as the person to make decisions for him. On numerous occasions, hospital staff asked Curt’s parents to make medical decisions. Each time, they would politely explain that Randy was the one to ask about such matters. The pattern continued over the three days Curt was hospitalized.

Denied the right to stay overnight with Curt, Randy left all his emergency contact information with the nurses and pleaded with them to call him if Curt’s condition worsened. Randy was distraught about leaving Curt alone. One morning, when he was unable to reach Curt, Randy phoned the nurses’ station. In a whispered voice, the nurse told Randy that Curt had not been doing well all night and that he had better come to the hospital. When Randy reached the room, Curt woke long enough to say “I love you” to Randy. These were the last words he ever spoke.

Bob and Randy fear that their relationship could be ignored, because their civil union isn’t well understood or given the respect of a marriage. They look forward to the day they can finally marry.