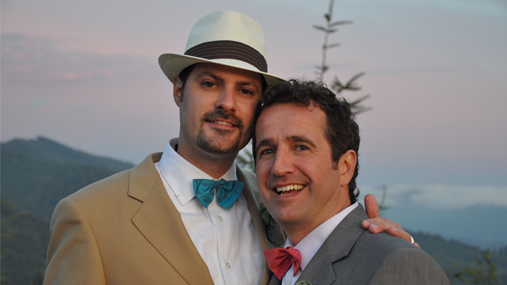 Paul and Ben reside in Portland, Oregon. Paul, a veteran of the United States Air Force, has been working in the renewable energy field for the last nine years and previously worked in the theatre arts. Ben is currently in a program to become a registered nurse, which he expects to complete in 2015, and previously worked for 12 years in the financial services industry. Paul and Ben were both born and raised in Oregon and had very religious upbringings.

Paul and Ben met during Portland Pride in 2006. They started up a conversation and Paul was touched by the fact that Ben had spent time earlier in the day with his father because it was Father’s Day. Within three months of that first meeting, they decided to live together.

By 2010, Paul and Ben knew they wanted to be committed to one another for the rest of their lives. Even though they could not marry under Oregon law, or their respective Christian faiths, they decided to hold a ceremony to declare their love and commitment to each other. The ceremony took place on August 21, 2010, with family and friends present. Paul was raised to believe in the sanctity of marriage, and although he recognizes that his faith may never sanction his marriage, he very much wants to have a civil marriage because of what it represents.

“Ben and I have loved and cared for one another for seven years,” says Paul. “Not being able to marry leaves a void in our lives that we want to fill. We were raised in Oregon and have always called Oregon home. We don’t want to cross the river to Washington State to get married. We want to get married in Oregon.”

Paul and Ben decided they wanted to become foster parents focused on helping children who had been dealt a particularly difficult hand in life. Paul and Ben completed all of the training, home studies, and background checks necessary to begin caring for children in their home. In the course of about a year and a half, they had long-term placements of three children and provided respite care for ten additional children.

In June of 2012, L.B.—a six-year old boy with serious behavioral issues—was placed with Paul and Ben. L.B.’s past history made the likelihood of finding a long-term placement for him very low. Paul and Ben worked extensively and exclusively with L.B., and in the process developed a deep parental love for him. They decided to adopt L.B., and are now waiting for the last step of the adoption to be finalized.

Paul and Ben want to make sure that L.B. grows up in a safe and stable home without the repeated message from society that their family is less worthy of dignity and respect than anyone else’s family. When they travel, the couple is concerned about whether or not their relationship, and especially their relationship to L.B., would be recognized by other people or government officials. They very much want to be legally married in Oregon not just so that others recognize the love and commitment of their relationship, but so that they will have the important legal protections for each other and their new family.