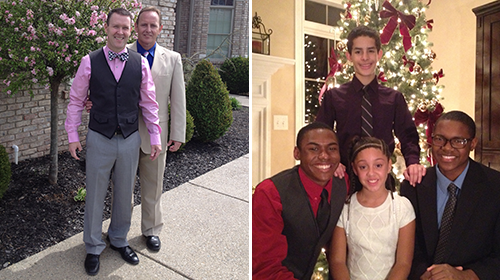 Tevin, Paul and Randy’s son is documenting his two dads make history and argue for marriage at the Supreme Court. Follow the Tumblr: TevinsTwoDads.com.

Paul Campion and Randy Johnson met in the summer of 1991 and have been together ever since. They live in Louisville and are raising four children together.

Almost 25 years ago, Paul and Randy met while Paul was visiting his brother in Louisville, where Randy also lived. Six months later, Paul took a leap of faith and moved down to Louisville to be with Randy and continue their new relationship. Decades later, the couple still resides in Kentucky and is fighting to have their marriage recognized.

Because of Kentucky’s discriminatory marriage laws, Paul and Randy’s four children only have a legal relationship with one of their parents. The family lives in constant fear that if something were to happen to Paul or Randy, the family would be unable to secure the financial and legal protections that their heterosexual counterparts rely on. When Paul was diagnosed with prostate cancer at 46, the family not only had to navigate the stress of his illness but was also faced with a host of legal questions about whether and how Randy would be recognized by medical providers during Paul’s treatment.

Today Paul and Randy are taking their case to the Supreme Court in hopes of bringing equality for relationships and families like theirs to the whole country.