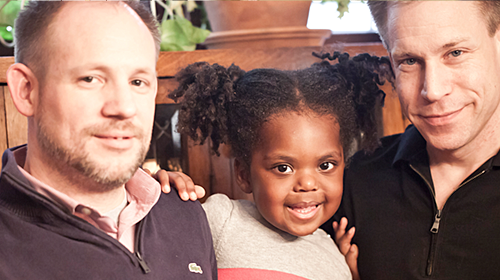 Jason Cadek, 37, and Nick Kramer, 42, both grew up in rural America. Jason is from North Loup, Nebraska, population 300. Nick grew up in Montana. When they met, Nick was a consultant living in NYC who frequently came to Omaha for work. They met in a way people often do in romantic comedy films: Jason was a server at a restaurant Nick frequented while in Omaha for work. After ten years as partners, they were married in October of 2013.

Nick joined Jason in Nebraska because they wanted to make a life together and raise a family. In September of 2011, Jason and Nick were in the delivery room when their daughter Alice was delivered and their family was born. They have been Alice’s parents, by her side, from the moment she took her first breath. Alice just celebrated her third birthday. However, because Nebraska doesn’t recognize their marriage, they could not jointly adopt Alice, leaving her with no legal ties to Jason, her “Daddy”, and without the comfort and security that she would have if Nebraska recognized her parents’ relationship.

Although the State does not recognize the family relationship between Jason and Alice, their extended family and community does. Shortly after Alice was born, Jason’s family wanted to host a baby shower for Alice in North Loup. So many people RSVP’ed that they had to move the event to a venue in a neighboring town to accommodate nearly a hundred people who wanted to attended.

Such family and workplace support, however, doesn’t change the fact that if Nick were unavailable, it might be difficult for Jason to make medical or legal decisions for Alice. Additionally, were Jason to pass away, Alice would receive no survivor benefits. The couple lies awake some nights fearing that Alice would not be able to stay with Jason if something were to happen to Nick.

“It’s amazing how having a child changes everything. We want Nebraska to recognize our marriage for Alice and our family. She deserves the same happiness, opportunity, and security that so many other children have.” – Nick