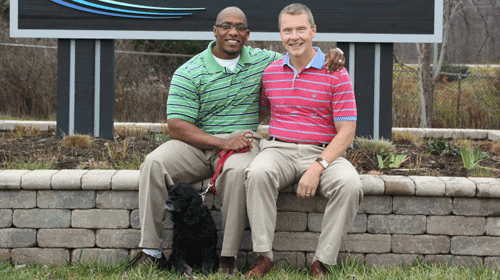 Nathan and Lee met in the early 1990s and were friends for years before they started dating. Nathan is from Chicago and was stationed with the Marines in Milwaukee when the two met. Lee is from West Bend, about 35 miles northwest of Milwaukee. They have been together for 19 years. Together, they have built a life and a home in Bayside, Wisconsin.

Nathan served in the U.S. Marine Corps from 1983 until his honorable discharge in 1994. Through his service, he earned a Navy Achievement Medal, Good Conduct Medal, and several Meritorious Letters of Commendations. “I enjoyed being a Marine and I really miss it,” he says. Since retiring from the Marines, Nathan now works at a small investment management firm. Lee works as a technology analyst for a Fortune 500 bank, where he has been for the last 12 years. Lee’s employer, like the majority of Fortune 500 Companies, provides domestic partner benefits and recognizes their marriage, making the case that what is good for their employees is good for business.

The day they finally got married started out like any day — Nathan went to work while Lee worked from home. While Nathan was at the office, he heard a court decision on same sex marriage was expected any minute. “I got home from work and before I knew it, I was looking for my birth certificate!” says Nathan. The Milwaukee County Courthouse stayed open until 9pm that night, and Nathan and Lee were #18 in line. They were happy to make their public commitment to each other and were excited that they could finally unite their lives the way they had always hoped.

Both Nathan and Lee’s families are very supportive of their relationship, and want them to be able to share in the joys and responsibilities of marriage. Nathan called his mother the day after the wedding in tears. “Why are you crying?” she asked. “Because I’m so happy!” he told her. Similarly, Lee’s 90-year-old mother was overjoyed that she had lived to see the day her grandson could marry the person he loves in their home state.

Even though Nathan and Lee were able to marry in Wisconsin, they still have concerns about the future. If something were to happen or if one of them got sick, they want to be recognized as a married couple, as each other’s family. When death separates them, they want to be buried together in a veteran’s cemetery, just like any other married military couple. If the state of Wisconsin does not recognize them as a legally married couple, they could be denied the recognition of marriage in life’s most critical times.