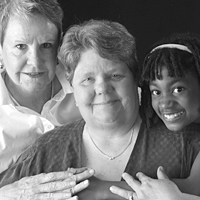 Miriam, 63, is the owner of Family Matters: Adoption Resources LLC. Ona, 66, is the president of Prosperity Works, a non-profit that focuses on eliminating poverty, building assets for the poor and changing the racial, gender and class inequities in all areas of life. The couple met when Ona was working with the Coalition for Children and Miriam was doing postgrad family therapy. Miriam became interested in poverty work, several people told her Ona would be a good person for her to get to know, and they hit it off. They have three adult daughters. They have also adopted their 14-year-old granddaughter, who suffers from cerebral palsy. She had originally been adopted by their middle daughter, but she has multiple sclerosis and her condition deteriorated to the point that she could no longer be the primary caretaker.

They jointly cared for both their mothers when they were dying, and were faced with “next of kin” and “family only” challenges when both of their mothers died within a year of one another. They had to lie, saying that they were sisters to be admitted in some situations and to make medical decisions in others. In 2010, Miriam’s sister underwent chemotherapy for breast cancer and Ona took off 10 days from work to go to St. Louis to care for her but, because Miriam and Ona’s relationship is not recognized in New Mexico, she had to take it as vacation time.