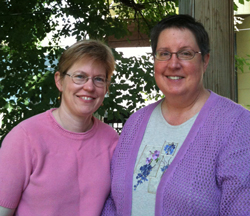 Like a lot of couples in our busy society, Michelle Mascaro and Corynne Romine met at work – when they were both in a chaplaincy internship at Rush Presbyterian Hospital. Since that time, in early 1991, Corynne and Michelle have created a loving, giving relationship that now incorporates their three children, ages 14, 12 and 11. For Michelle and Corynne, one of the most painful things about not having their relationship honored as a marriage in Illinois is the impact on their children of learning that their parents cannot marry.

“As our children mature, we are trying to teach them important life lessons about honoring relationships and respecting the family unit,” says Michelle. “It is difficult to communicate a message about the importance of marriage when we are denied the right to enter into one.” Corynne and Michelle recognize the importance of marriage, having seen it through their parents. Corynne notes that her parents have been married for more than a half century, and has seen “how marriage and the commitment of marriage helps a family cope with the ups and downs that are simply a part of life.”

Michelle and Corynne had a private celebration and affirmation of their love at their home in 1995. After making that commitment, they began a family, adopting the first of their three children. Today, they spend as much time as possible with the children – and spend a great deal of time attending to events at their children’s school, church, sports teams and other activities.

After Illinois approved civil unions, Corynne and Michelle were not certain about seeking that status. They wanted to be married. After six full months, on January 6, 2012, Michelle and Corynne, along with their children, traveled to downtown Chicago to obtain a civil union. The date was significant to them – for it marked the 20th anniversary of their living together as a couple.

Corynne and Michelle know that their civil union addresses some concerns about benefits, but neither feel it is sufficient. When they take one of their children to an appointment or go to the doctor themselves, they often are confronted with forms that ask if they are “married, single, divorced or widowed.” Even after the passage of civil unions, the forms remind them their relationship isn’t understood or accepted and is easily ignored.

For themselves and their children, Michelle and Corynne want the chance to publicly affirm their commitment in marriage.