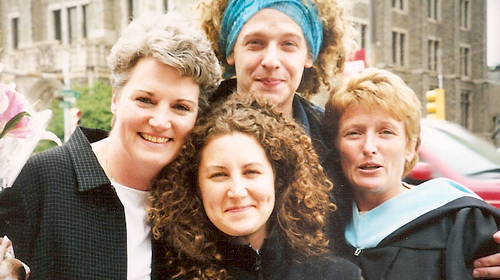 Both life-long Philadelphians, Maureen and Mary Beth raised three children together: Maureen’s son from a previous relationship, and Mary Beth’s niece and nephew, whose mother died when they were young. And they became grandmothers to three grandchildren, now 19, 9, and 8 – with a fourth due in July 2013.

Maureen and Mary Beth were married in Massachusetts in June 2011. They would have preferred to marry at their local Quaker meeting house surrounded by all of their loved ones, but getting married in Pennsylvania was not an option and they knew that their time together was too limited to wait.

While Mary Beth was suffering the physical and emotional pain of end stage cancer, she had the additional burden of worrying about how Maureen would manage financially after she was gone Because their marriage is not recognized in Pennsylvania, Maureen must pay a 15 percent inheritance tax on half of their shared property, including their home. And unless their marriage is recognized in Pennsylvania before Maureen turns 65, Maureen will not be eligible to receive Mary Beth’s Social Security benefits. Pennsylvania’s refusal to recognize her marriage to Mary Beth does not just cause Maureen economic hardship. In her time of grief, she is denied the comfort and dignity of being acknowledged as Mary Beth’s widow.