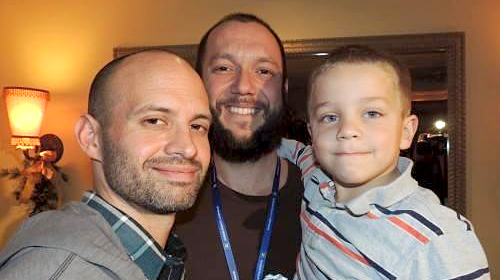 Matt, 38, and Tony, 33, are lifelong Utahans – Tony was born in and raised in West Jordan, and Matt’s family moved to Ogden when he was only a year old. Matt is an attorney and Tony is the director of a nonprofit organization that serves homeless families. “Tony and I share the same values, the same love for our families and for Utah, and a similar outlook on life,” says Matt. “Our relationship was built on a strong foundation, and it’s only gotten better over our 11 years together.”

They had been contemplating starting a family when, in 2009, a struggling couple they knew who were expecting a baby approached them and asked if they would consider adopting the child. Mr. Barraza and Mr. Milner resolved to being involved, dedicated parents and attended all of the pre-natal appointments with the birth mother, were present at their son Jesse’s birth, and Mr. Milner cut the umbilical cord.

Under Utah law, only one of them could legally adopt Jesse, so only Matt is a legal parent to the son they’re raising together. Jesse is now what his dads describe as “100 percent 4-year-old boy.” Tony says, “He has tons of energy and loves to jump and run and throw balls and get dirty.”

Within days of getting married in Salt Lake City, Matt and Tony asked a court to allow Tony to become Jesse’s second legal parent. But when the governor announced his intention to treat the marriages of same-sex couples as invalid, the family court judge postponed Matt and Tony’s adoption hearing. They’re now in limbo, waiting to see what the courts do next. Tony says, “Our son deserves the safety and security of being certain that if something happens to Matt, his other dad won’t be forced to disappear from his life too.”