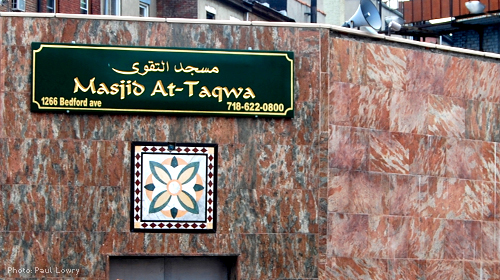 Masjid At-Taqwa, a mosque in Brooklyn, New York, holds daily prayer services and provides religious education and counseling to its congregants. An NYPD surveillance camera has been installed outside Masjid At-Taqwa, recording the comings and goings of worshippers, since as early as 2004. Over the years, the mosque has also been infiltrated by NYPD informants. This NYPD surveillance has had a deeply negative impact on the community, inspiring fear and anxiety among congregants, some of whom have left the mosque.

To protect itself from discriminatory and suspicionless police scrutiny, Masjid At-Taqwa has taken a number of precautionary measures, including making sure sermons are recorded. Religious leaders, fearful of infiltration by NYPD informants, also include third-party witnesses in private counseling sessions for newcomers, sacrificing the ability to provide confidential religious guidance. The stigma and fear caused by unlawful NYPD surveillance have significantly chilled the religious leaders’ ministry and expression and prevented the mosque from fulfilling its mission of serving as a religious sanctuary.

In response to the proposed settlement announced in January 2016, Imam Siraj Wahhaj, of Masjid At-Taqwa, said:

“We know from the long struggle for civil rights in our country that the road to full equality is not easy to walk and that many obstacles remain ahead. Yet today’s settlement is an important milestone in that journey. It sends a message that, no less than our brothers and sisters practicing other faiths, our rights as American Muslims must also be honored and protected.”