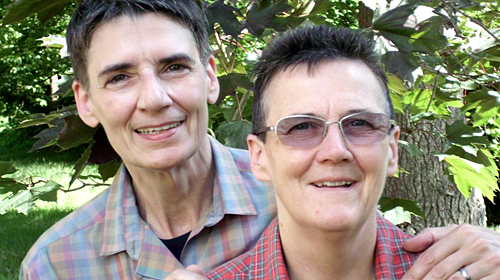 Marla, 54, and Julia, 58, met when they were in Army basic training together in 1983, started dating a couple of years later, and have been together for 27 years. Julia was discharged during basic training after her superiors learned of her sexual orientation. Military policy at the time barred lesbians and gay men from serving. Marla went on to serve for 12 years and left the Army as a sergeant in 1995. They now live in Harrisburg, where they both work for the commonwealth. Julia is a software architect/project manager and teaches computer science at Penn State Harrisburg. Marla is a senior benefits manager.

Marla and Julia not only support one another, they also took care of Julia’s mother for 12 years when it became difficult for her physically and financially to live on her own. She lived with them until she passed away in 1997.

In 2009, Julia and Marla traveled to Iowa to marry in Marla’s home town and became the first lesbian couple to get married in the county where Marla grew up. Julia joked, “I had to sneak my girlfriend across state lines to marry her,” and confessed that during the ceremony she was “bawling like a baby!” Marla added, “I can’t tell you how wonderful it was to marry Julia. It was our commitment come true.”

Because their marriage is not recognized in their home state of Pennsylvania, Marla and Julia have gone to considerable expense to protect themselves legally and have paid far more for health insurance and other expenses than they would have to if their marriage were recognized. Moreover, they are now both in their fifties and have worked hard to save money for their retirement, but they worry that when one of them dies, the widow will be left financially insecure because she will be denied the spousal exemption from the inheritance tax and, thus, have to pay a large tax on half of their shared property, including their home. Marla and Julia pay hundreds of dollars a year to carry life insurance policies in order to cover the cost of inheritance tax when one of them dies.