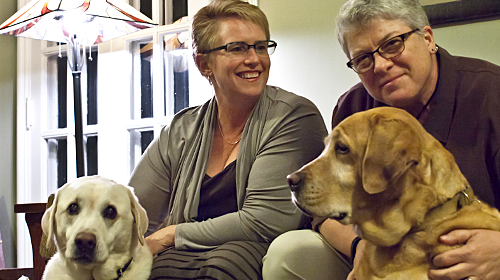 When Marj Plumb, 55, and Tracy Weitz, 49, moved to Omaha this year for a job, they brought with them a half-million dollar a year business, two distinguished careers, and mounds of legal questions.

They have been a couple for 10 years but have known each other for longer. They met almost two decades ago when they were both living in the San Francisco area. In 2008 during a vacation with extended family, they got married. The wedding was a small intimate affair. To them, it was perfect, being in a small rural community with their family and formalizing the love they have shared for years.

After a job offer for Tracy, which they couldn’t turn down, they moved into a 100 year old house in Dundee with their two big dogs. In the time they’ve been in Nebraska they hired local contractors and businesses to help them renovate their home, a centerpiece in the historic neighborhood. Pleased to now call Nebraska home, the price of moving to Nebraska has been, in effect, to become divorced for the purposes of state law.

They have too many times since moving here worried about what their legal status is in this state and how they would care for each other if something were to happen. Before answering what for most people in Nebraska is a simple question asked on forms at doctors’ offices, banks and other places — What is your marital status?–they don’t know whether to check the box “married” or “single” given that they are married but Nebraska considers them single. They hired accountants and attorneys to help them plot out the strange path between being legally married in one state, and through the eyes of the federal government, but not legally married in Nebraska.

“I was born and raised in the Midwest, with siblings, nieces and nephews and their families now within a day’s reach. We didn’t come to Nebraska to pick a fight. What we relied on when we made the decision to move to a state whose law does not recognize our marriage is the belief that deep down Midwesterners believe in fairness and equality and that this would soon change.” – Marj