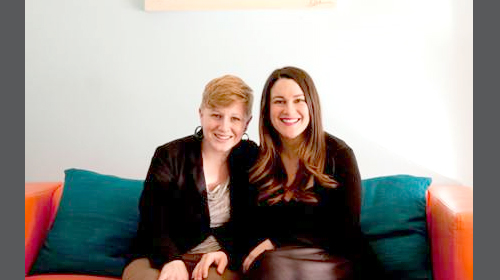 Marina, 29, and Elenor, 28, are born and raised Utahans, from Salt Lake City and Ogden, respectively. They met nine years ago through friends, started dating shortly afterward, and have been together ever since. Unless you count the five minutes they once broke up because, Elenor says, “She made me ride the New York, New York rollercoaster in Las Vegas!”

On the day the court struck down the anti-gay marriage ban, Marina and Elenor were stunned but thrilled. “Within an hour of hearing the news, we were racing to the county building. We ran in and went to the wrong doors a couple of times, while staffers were cheering us on and pointing us in the right direction. It was madness and it was awesome.”

Marina and Elenor have been talking about having a baby soon, but they worry about the ability to protect their family because Utah law would only allow the biological mother to be a legal parent to any children they have together. But they rankle whenever someone suggests that they just leave Utah. “Our lives are here, our friends are here, our jobs are here, and we love this city. This is our home,” says Elenor. “We love where we live. We want to raise a family here.”