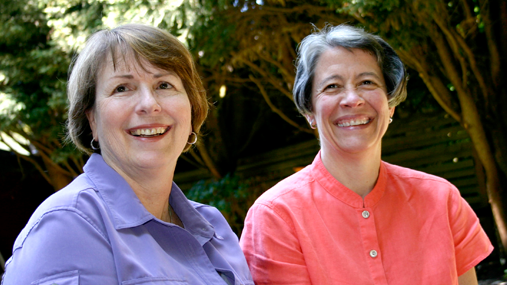 Chris and Lisa’s paths crossed in 1982 at the Oregon Health Sciences University (OHSU) School of Nursing in Portland, Oregon, where Lisa was working on a Master’s degree and Chris was directing research. They began dating in 1985 and in September 1986 had their own, private commitment ceremony and exchanged rings.

Lisa gave birth to both of their children, but Chris needed to complete a second-parent adoption so that she would be a legal parent to Katie and Jacob. This process required paying thousands of dollars for home studies and attorney fees to handle the legal steps. They also decided that since Chris’s job paid more, it made sense for Lisa to work part-time so she could care for their children.

When marriage for same-sex couples became possible in 2004, Lisa and Chris jumped at the chance to marry that first day. “We were surprised at how meaningful marriage was for us,” Tanner recalls. “When we could tell our families that we were married, they finally understood who I was to Lisa. We framed our marriage certificate and hung it in our kitchen so we’d see it every day.”

Later that year after Measure 36 passed, the Oregon Supreme Court subsequently declared the marriages of same-sex couples invalid. “We were once again surprised,” said Tanner. “This time we were surprised at how devastating it was to have our marriage nullified.”

“We have been together for nearly 30 years. We have raised two wonderful children, are involved in our church community and are respected in our work. We have done everything we can to legally protect our family and each other,” Chickadonz says. “I was raised in a culture where marriage was a very important milestone. When you were lucky enough to fall in love with someone, you got married. I have loved Chris for half of my life and I want to marry her. It’s as simple as that.”