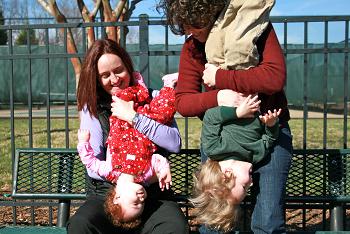 Lee Knight, a 36-year-old lawyer, was working part-time at an outdoor gear store while studying for the bar exam in 2005. Dana, 41 — who served in the Navy during Operation Desert Storm, later served in the Naval Reserve and the Army National Guard, and now works for the Veterans Administration — had recently moved to Charlotte and got a part-time job at the same store in the hopes of making new friends who were also into outdoor activities. They met shortly after that and have been together ever since.

Lee Knight carried 3-year-old Miller and 1-year-old Margot. The only child of divorced parents, Lee Knight hasn’t seen her father for nearly 20 years. While Lee Knight’s mother is a supportive and devoted grandmother, Lee Knight and Dana worry about the children’s future if something were to happen to both Lee Knight and her mother. “Dana does so much for our children, for everyone in our lives, and for our country,” said Lee Knight. “It’s so sad that our kids aren’t able to have a legal relationship with their own mom.”