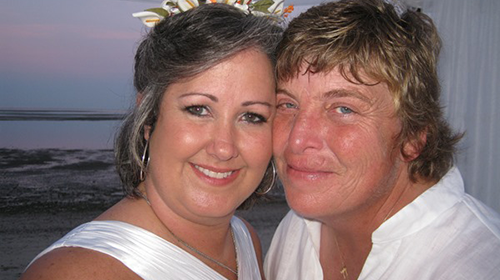 Kim Franklin and Tammy Boyd have lived together in a committed relationship for eight years and were married in 2010 in a ceremony on the beach in Connecticut. Though they first met in the 1980’s, it wasn’t until 2007 that they reconnected and began dating.

Kim describes Tammy as her “greatest gift” and recalls their wedding day as the day when all her “dreams were coming true.” Their wedding day, Tammy remembers, “was the most beautiful sunset” and the couple finally had the chance to publicly declare their love together before family and friends.

Even though they have shared a loving bond for nearly a decade, Kim and Tammy are still legal strangers in Kentucky and are fighting to have their marriage recognized in their home state.