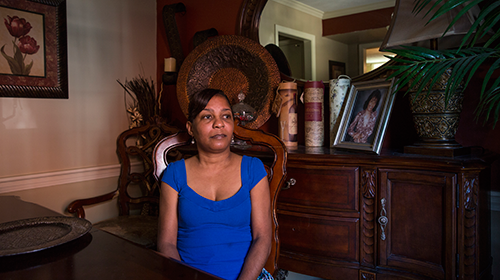 Kenji Hobbes was released from EMCF just over a year ago. His mother, Cynthia Hobbes, does not know exactly what happened to her son; the prison’s medical records are inconclusive. “But I do know that when my son left he was a normal man, and when he came back he was not,” Cynthia said.

At the time Kenji went to prison, he was working as a building maintenance supervisor. “He’s always been good with his hands,” Cynthia said. “He can build a house.” But since his return home from EMCF, he uses his hands to take apart and put together his car and truck like it’s a puzzle. “It’s so heartbreaking,” Says his mother. He doesn’t drive. He can’t work. Anything that reminds him of the prison sets him off. Cynthia remembers one night when he saw a commercial about a medication’s side effects and said “‘See mama. This is what they did to me. Look at that. They’ve got you on TV. They’ve got the medicines.'” Cynthia says that all she does is “pray and hope that he can come back and be normal. [He’s] 27-years-old and on disability. That’s not what I wanted for my child and I’m sure that’s not what he wanted.”