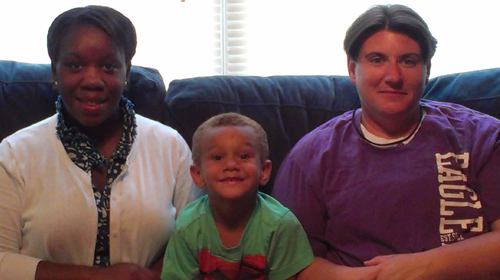 Lifelong Virginia natives Joanne, 37, and Jessi, 33, both grew up on farms – Joanne in Big Island, and Jessi in Augusta County. They met 11 years ago at a mutual friend’s get-together and now live in Staunton with their four-year-old son Jabari. The family attended Metropolitan Community Church of the Blue Ridge and Joanne and Jessi were baptized together in a fellow church member’s backyard river in 2006. Jessi and Joanne now attend an African Methodist Episcopal Church, in Staunton, where Jabari was baptized in 2010. Due to Joanne’s Epilepsy attending church on a regular basis as a family has been difficult. Jabari plays soccer and basketball and takes swimming lessons at the YMCA. He also plays Kiwanis t-ball through the Staunton Parks and Recreation Department.

Joanne has made her career in higher education and mental health agencies, most recently serving as an administrator at an agency in Lexington for five years. She was recently appointed as the new Director of Diversity and Advocacy at Mary Baldwin College, where she was Director of African American and Multicultural Affairs before Jabari was born. Jessi worked for several years with people with developmental disabilities. After deciding a couple of years ago that she’d like to work with children, she now investigates reports of child abuse for Virginia’s child protective services system.

Joanne and Jessi had a commitment ceremony in 2006 because it was important to them to have a ceremony before they had children. They describe it as one of the happiest days of their lives, but it was bittersweet four years later when they attended Jessi’s brother’s wedding. Jessi said, “Both ceremonies were big family events, but we all knew that a legal wedding meant something entirely different for my brother and his wife.”

Jabari calls Joanne “Mommy” and he calls Jessi “DeeDee” or “Momma DeeDee.” Jabari is proud of his family, but he’s clearly aware that his mothers can’t get married, and he wants that for them. They have a photo in their home from their commitment ceremony, and Jabari sometimes points the picture out to others and says, “Mommy and Momma DeeDee got married, and they need to really get married.” Joanne and Jessi couldn’t agree more.