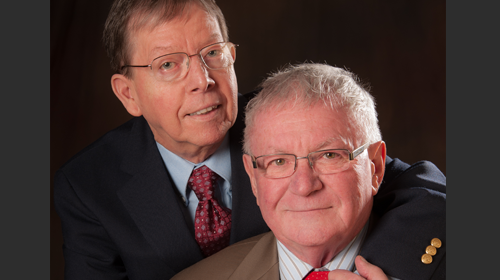 Jim Meade and Luke Barlowe have been in a committed, loving relationship for over 46 years. The two met in 1968 at a bar in Louisville while Jim was studying at Morehead State and traveling regularly to Louisville to more gay-friendly spaces. Before long the two men were inseparable and have been ever since. Though work brought them outside of Kentucky, they returned to their home state in 2006 and don’t plan on leaving.

In 2002, Jim was diagnosed with Non-Hodgkin’s Lymphoma and the couple faced the challenges of navigating a health crisis without the legal security that comes with marriage.

After 41 years together, the couple was married in Iowa in 2009 but because of Kentucky’s discriminatory marriage bans, they remain legal strangers at home. Now they are fighting for the recognition that all married heterosexual couples have in Kentucky and are hoping that their 46-year journey together will include equality under the law for their love and their relationship.