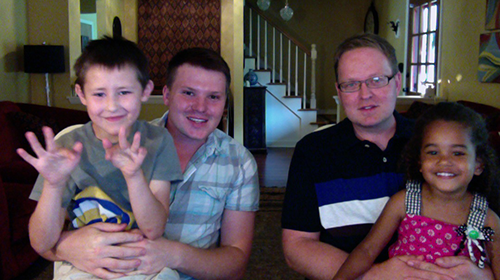 Jim and Alex are lifelong Wisconsinites from Pembine and Delafield. For both of them, their deep Christian faith taught to them by their families has always been very important in their lives. This shared faith has been a critical part of their relationship; they met while Alex was a student at a nearby Bible College, and Jim was managing the local Christian bookstore. After dating for six months, they fell in love and knew they were right for each other.

Jim and Alex always wanted to have kids, and decided early on that they would like to adopt from foster care so that they could help children in need. 10 years ago, they began fostering children, and soon they adopted two special needs children from the foster care system. Elliot, who is 8 years old, has autism, and Belle, who is 4 years old, has other behavioral issues. While parenting special needs children can be a challenge, they feel blessed to be able to provide a loving, supportive home to their family.

Jim is music director for their church, Emmanuel United Church of Christ in Oconomowoc, which they started attending in 2004. Alex owns a local business,ElleBelle Salon, named after their kids, which he opened in May 2013.

When the court decision allowing same-sex couples to marry was announced, Jim and Alex talked about it all weekend. They were overjoyed to have the opportunity to marry in their home state, so on Monday morning, they loaded the kids into the car, invited their pastor, and were among the first in line at the County Courthouse. Receiving their marriage license was an amazing moment. After so many years, they were finally able to officially make their commitment to each other and their family official.

With deep ties in their community, they want to be recognized as married just like any other couple, and they both want be recognized as legal parents to their children. For now, Jim adopted Elliot and Alex adopted Belle. When they adopted Elliot, they applied for co-guardianship. However, a family court judge deemed that the couple was essentially “just dating,” and denied their request. With their current arrangement, they worry that their family might be split apart if something happened to either one of them. Marriage would give Jim and Alex peace of mind in knowing that, no matter what, they will be recognized as the committed family they are.