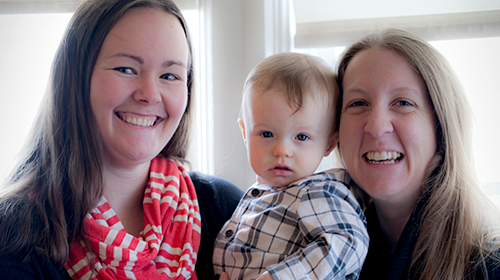 Kathleen Källström-Schreckengost grew up in Omaha and moved away to go to Barnard College where she met Jessica in 2004. The couple started dating soon after meeting and quickly fell in love. In 2010 they were married in Massachusetts.

Their son Sebastian was born in February of this year while the couple was living in New Jersey. Jessica gave birth and both parents’ names are on the birth certificate. They hope for another child and are already making arrangements to grow their family – but they worry that if they had a child in Nebraska, he or she wouldn’t be able to have two legal parents.

Even with Sebastian, they worry that Nebraska’s refusal to recognize their marriage sends a message that his family is less deserving of support and respect than other families. Moreover, because of the lack of legal recognition of their marriage, Kathleen and Jessica will have to take on additional expenses to get legal documents such as powers of attorney and health care proxies in order to provide some of the protections that come with marriage, although they know that no legal documents can provide most of the protections of marriage.

Having a child motivated Kathleen and Jessica to move back to Nebraska to be near family and to give their son a Midwestern upbringing. Sadly, the cost of moving to Nebraska to be close to family was to be effectively “unmarried” and, thus, considered less of a family in the eyes of the state.